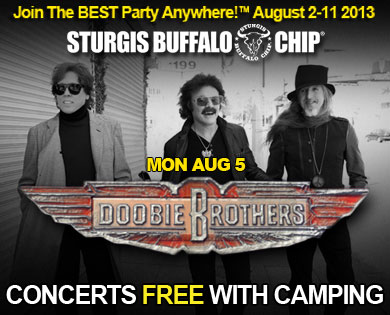 The superstar classic rockers responsible for over four decades of American top hits, the Doobie Brothers, will join the the 2013 Sturgis Buffalo Chip summer music festival, taking the famed motorcycle and music festival stage on Monday, August 5, prior to another American icon, Kid Rock. The band has come a long way since their inception, selling millions of albums over the years and earning a prestigious induction into the Vocal Group Hall of Fame in 2004. The Doobie Brothers are expected to perform top hits that everyone knows such as “Long Train Runnin’,” “Listen to the Music,” “What a Fool Believes,” “Black Water,” and many more that fans love. The Doobie brothers This is one concert you won’t want to miss.

“Not only does everyone know and love the Doobie Brothers songs,” says Daymon Woodruff of the Sturgis Buffalo Chip. “They’re known for putting on great live shows, they connect deeply with the audience, and fans walk away their concerts feeling the have experienced a true American sensation.”

Founding member Tom Johnston says, “The Doobie Brothers are about playing live,” and that’s a big reason they have been invited to perform at the Largest Music Festival in Motorcycling™. For 32 years the Sturgis Buffalo Chip has been the go to place for live world class performances by epic superstar talent during the Sturgis motorcycle rally. Founding members Tom Johnston and Pat Simmons, and 30 year-plus veterans John McFee and Michael Hossack are still rocking great live shows.

The Doobie Brothers have been performing, creating and recording America’s top hits for more than 40 years.

Don’t miss this summer music festival phenomena of all American classic rock as the Doobie Brothers join Kid Rock on a night that you won’t forget. Get your passes now for one of the hottest nights in music and motorcycling.