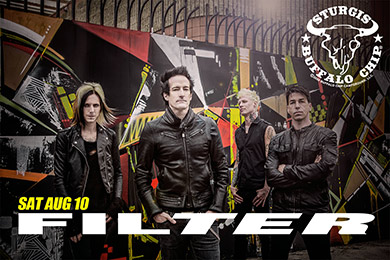 Rock Innovators Sound Off During Final Night of Sturgis Concerts

The Sturgis Rally newcomers thumb their nose at tradition by filling their songs with lavish bass lines, biting lyrics, rugged guitars and hypnotic synthesizers, all over the backdrop of pounding drum machines. Since the 1995 release of their debut album, “Short Bus,” Filter’s ability to transcend the boundaries between rock, industrial and electronic music has struck a chord with the masses.

The crowd won’t know what hit them when the Buffalo Chip amphitheater echoes with the signature roar of front man, Richard Patrick. Hits like “Hey Man, Nice Shot,” “Welcome to the Fold,” and “Take a Picture,” as well as 2013 hit “What Do You Say” are sure to send Sturgis Rally-goers into an absolute frenzy!

Describing their new album, “The Sun Comes Out Tonight,” Patrick proclaims, “It was so easy to be angry on this record. There are songs about betrayal and pure evil. There’s so much heavy stuff. But there are moments of light, songs about happiness and love. It’s our analysis of the human condition.”

Throughout their career, Filter has kept busy with tour dates around the globe. But as strong military supporters, the band sets aside time to give back to our country’s heroes. Filter’s involvement with Stars For Stripes has given them the honor to perform for deployed troops in Kuwait, Iraq and Guantanamo Bay. During a trip to Iraq, the band survived rocket attacks, an experience that gave them a strong insight into the real dangers faced daily by military members.

The explosive performance by Filter during the grand finale of the Sturgis music festival is certainly not one to be missed.  Reserve your passes now for this unbelievable evening of Sturgis concerts!