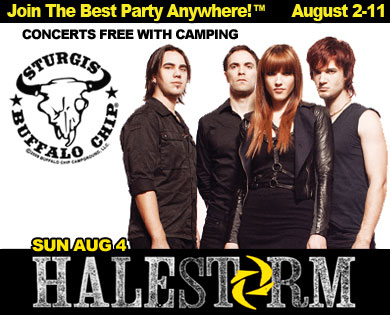 Get ready for a rock concert of Grammy award winning proportions and make way for Halestorm. Halestorm, the unstoppable hard rock band hailing from Pennsylvania, will bring their Grammy award winning music to the Largest Music Festival in Motorcycling on Sunday, Aug. 4, 2013, opening for legends ZZ Top.

Halestorm, comprised of lead singer Lzzy Hale, her brother Arejay Hale on percussion, Joe Hottinger on lead guitar, and Josh Smith on bass guitar, took home the 2013 Grammy for Best Hard Rock/Metal Performance for their lead single “Love Bites (So Do I).” Hot on the current charts, fans can expect to hear this song and other hits during Halestorm’s August music festival performance at the Buffalo Chip. Lzzy Hale says Love Bites (So Do I) is meant to empower people, especially when relationships go down the tube.

The writing for Halestorm’s new album, The Strange Case of…, started while they were on the road in 2010. While finishing the Uproar Tour in May 2011, they entered the studio and tracked “Love Bites (So Do I),” which they say is the heaviest songs of their career, a song perfect for the 2013 Sturgis rally audience who has requested this powerhouse band on many occasions.

Halestorm’s hard rock features escalated tempos and raw energy, which saturates straight to the core of any hard rocking music fan and biker. Their start-stop chorus rhythm and confrontational lyrics in “I Miss the Misery” and their euphoric vocals and motivational riffs from “Rock Show” are sure to keep you rocking all night long during their highly anticipated August music festival performance.

The idea of creating even harder rock songs appealed to Halestorm after their success with “Love Bites (So Do I),” but that did not stop them from creating other rocking, slower, more intimate songs like, “Break In,” “In Your Room,” and “Beautiful with You” that Stugis rally concert goers will enjoy.  The album took on a schizophrenic feel, with the addition of the mid-paced ballads and the Lzzy Hale written song “Mz. Hyde”, which showcases the two disparate sides of her personality and brings the album into focus.

Get ready for Halestorm to rock the Legendary Buffalo Chip’s August music festival. Halestorm is sure to tear up the Wolfman Jack Amphitheater stage during the 2013 Sturgis Rally!