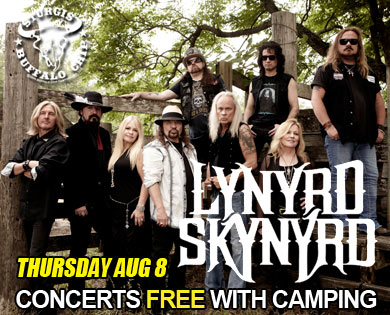 The world’s most renowned Southern Rock band, Lynyrd Skynyrd, is back to captivate audiences with America’s most popular classic rock hits Thursday, August 8, 2013 at the Sturgis Buffalo Chip®. As one fan attests “When Skynyrd plays, it’s the best night ever.”

“Lynyrd Skynyrd is the most influential and indomitable band in Southern Rock history,” says Daymon Woodruff of the Sturgis Buffalo Chip.  “Timeless unyielding hits, crowds of thrilled audiences and thundering encores say it all. Like a cocktail blend of adrenaline, ‘Freebird’ and good times, Skynyrd is the IV that plugs you right in!”

The Lynyrd Skynyrd concert at the Chip will give fans a completely different side of Lynyrd Skynyrd than can be experienced anywhere else in the world. In addition to sucking in favorite American classic hits such as “Sweet Home Alabama,” “Freebird,” “What’s Your Name”, “Simple Man,” “Gimme Three Steps,” and more, fans can also expect to experience the explosive applauses of thundering motorcycles and thrilled fans during the climactic signature moments of the Best Party Anywhere™.

After 35 Years, 30 million sales of 60 albums worldwide, the band continues to crank out songs that go down in history as true Southern Roots American Rock n’ Roll, reinforcing the musical icon’s rightful place in the Rock N’ Roll Hall of Fame.

Lynyrd Skynyrd stays true to traditional country overtones with a solid Southern rock base and fierce solos. Their outrageous jam in “Free Bird,” remains one of the best known and most requested live guitar solo in history.

Join Skynyrd for a night like there’s never been before and get ready to declare, “It’s the best night I’ve ever had!”