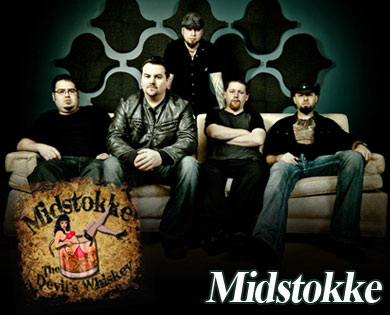 Midstokke is back by popular demand to rock the Legendary Buffalo Chip’s August music festival hard with its electrifying rock, blues and funk motorcycle music. Midstokke, a band notorious for having a good time in Sturgis, is easily recognizable by the lead singer’s horned and hairy helmet and wild stage antics that blast the audience with a full frontal assault of high energy music, The band is scheduled to rock the Chip’s showcase stages nightly during their return dates to the Largest Music Festival in Motorcycling™. Midstokke is a band you won’t want to miss in Sturgis! And they’re only at the Chip!

“Midstokke hits the stage like an atomic bomb,” says Daymon Woodruff of the Sturgis Buffalo Chip. “These guys give fans every ounce of the “Party” they deserve.”

The unique band formed in 2004 out of Seattle when vocalist Steven Douglas, guitarists Ted Norris and Kenny Van Dkyke, drummer Cory Olsen and bassist Fraser Midstokke fused together to jam. They found the perfect fit with each other and released their first album in 2005. The band’s high-energy rock was so perfect for the motorcycle music audience that in 2007 a local motorcycle dealer, Sound Harley-Davidson, invited them to participate in a Battle of the Bands. The ultimate prize for the contest was a chance to perform at the Bufflalo Chip’s August music festival during  the annual Sturgis motorcycle rally. Destined for Sturgis, the band went on to win the battle and has since  played at the August music festival many times.

Midstokke released their second album in 2009 followed by  their third rocking album in 2011, giving people more  party-like energy  to get  up and rock! Midstokke  refers to themselves as “the working man’s band”, tailoring to people who want to pull off that tie and kick off those heels and just have a good.

You’ll kick up your boots and rev your engines to this hard rocking, funky band each night on the showcase stages.  Don’t miss your chance to catch Midstokke live at the Legendary Buffalo Chip in 2013! Join the Best Party Anywhere!