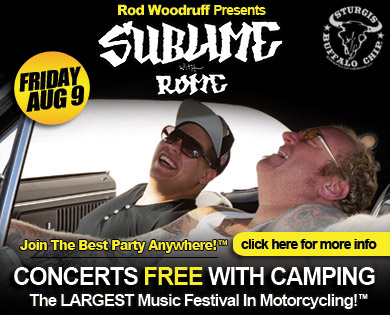 The reggae rock fusion band Sublime with Rome is back by popular demand to take the Largest Music Festival in Motorcycling™ and the Sturgis camping, motorcycle and music fans by storm with their one of a kind reggae rock sounds. Sublime with Rome will once again rock the Wolfman Jack amphitheater stage with new hits such as “Take It or Leave It,” “Lover’s Rock” as well as Sublime fan favorites like “40 Oz. to Freedom,” “Santeria,” “What I got” and more. Sublime with Rome will take the stage during the August music festival on Friday, August 9, 2013.

The new Sublime with Rome, which performed at the Buffalo Chip Sturgis August music festival in 2012, formed in 2009 with front man Rome Ramirez and has completed three successful tours around the world since it’s inception. Rome came onto the Sublime scene with a new vibrant talent and enthusiasm that rejuvenated the band, bringing with him chords and musical riffs that were new to the band. The band’s first big show as Sublime with Rome in October 2009 was to a crowd of 20,000 people. They then played to a sold-out tour in March 2010 and entered the studio for a new album recording.

The band dropped “Yours Truly,” their first album as Sublime with Rome, in the summer of 2011. The album picked up where the original Sublime left off and added in new features to the band’s sound. Songs like their first chart topping singles “Panic,” “Take it or Leave it,” and “You Better Listen” brought back old Sublime roots and the new hits “Lover’s Rock” and “Murdera” brought in a new reggae dancehall sounds.

Sublime with Rome brings a fresh sound to Sturgis camping, motorcycle and August music festival attendees that will rev their engines all night for. Don’t miss your opportunity to catch this once-in-a-lifetime performance at the 2013 August music festival during the Sturgis motorcycle rally. See other artists at the Sturgis camping venue such as ZZ Top, Toby Keith, Brantley Gilbert, Queensryche, and many more by reserving your passes now while the price is still hot!

You can read more about Sublime with Rome at http://sublimewithrome.com/