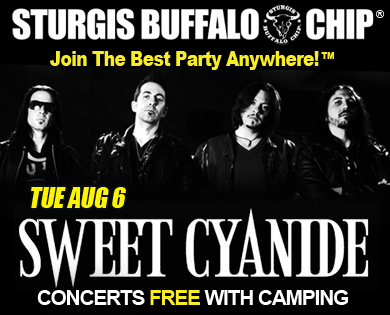 Ready to hit the Sturgis Buffalo Chip, Sweet Cyanide, having carved up the Chip stage over the past two years during the Sturgis rally with icononic bands such as Buckcherry, Boston, Def Leppard, Skid Row and Slash has emerged from the studio with the evolutionary release of their third killer album, “Sweet Cyanide III” which aims to reflect their musical and spiritual evolution.

“Stuffed full of brainwashing melodies, Sweet Cyanide’s hard hittin’ testimonials to rock are straight up exciting,” exclaims Daymon Woodruff of the Sturgis Buffalo Chip. “Not only is every single Sweet Cyanide song and performance good, they rock! There is no such thing as simply ‘watching’ these guys, because every one of their shows at the Chip is so powerful you don’t have a choice but to feel them.”

Sweet Cyanide songs like “In My World,” “Sex, Love, Cyanide,” “In the Eye of the Storm,” “Solitary Son,” and “Red Rats,” to name a few, keep fans craving more and speak volumes to their achievements and growing popularity.