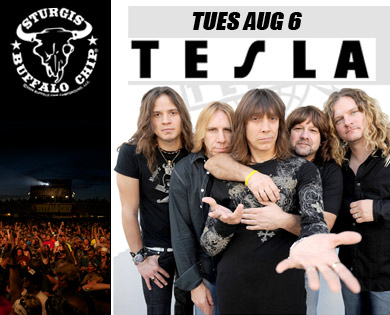 In their early years, TESLA brought a unique sound to ‘80s hard rock—cleverly combining metal with elements of the blues.  The resulting down-to-earth sound resonated with fans worldwide, and within a few short years, TESLA had released a collection of mega-hit songs.  Fans at the 2013 Sturgis Rally can expect to hear favorites like “Modern Day Cowboy,” “Little Suzi,” “Love Song,” “What You Give,” “Gettin’ Better” and “Signs.”

“Tesla’s longevity and musicianship speak for themselves,” says Daymon Woodruff of the Sturgis Buffalo Chip. “But you really haven’t seen anything until you’ve seen them live at the Chip. They never disappoint.”

After a six-year break up, TESLA reunited in 2000.  The group has lunged into this new era of music, releasing albums that prove they not only can compete with modern rockers, but also continue to set the standard for the genre.