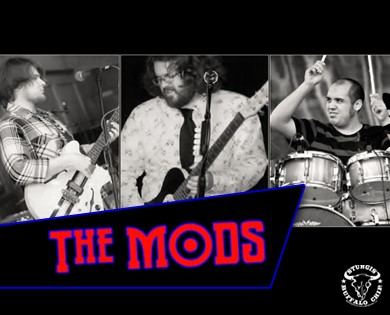 Though the band formed in 2004, The Mods certainly have an old-school sensibility about them. Named after the 1960s subculture that originated in England, The Mods were deeply influenced by rock music of that generation, as well as alternative music from the 1990s. To that end, the band’s music carefully combines the cheerful demeanor and uncomplicated approach of ‘60s rock with a dash of ‘90s edge. It’s a musical recipe that will definitely satisfy a Sturgis Rally crowd.

The trio’s unmistakable chemistry helped bring about such irresistibly catchy tracks as “Nothing More to Say” and “Ethanol.” Concert-goers at the Sturgis campground are sure to find the energy behind these and other Mods songs positively contagious.

“Will Chip fans like the Mods?” asks Daymon Woodruff of the Sturgis Buffalo Chip. “With song titles like Ethanol and lyrics about making your head spin, at the Best Party Anywhere, I’d say they’ll fit right in. The Mods have a groove that, when you close your eyes, cause you not just to reminisce 60’s and 70’s, but to feeeeeeeel 60’s and 70’s. Fans are gonna love em.”

Undoubtedly The Mods’ upbeat performance is one not to be missed. So join the party and feel the music. Reserve your 2013 Sturgis Rally passes now!