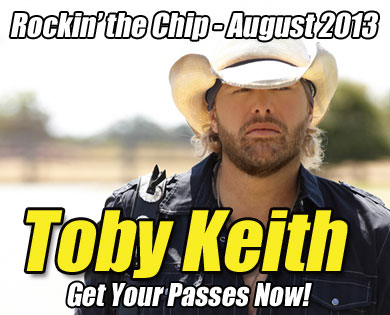 Buffalo Chip, South Dakota (September 13, 2012) The Sturgis Buffalo Chip® welcomes home Toby Keith to their annual musical festival on August 2-11, 2013 during Sturgis Motorcycle Rally. Toby Keith, recipient of Billboard magazines Country Artist of The Decade award is one of the Buffalo Chip’s all-time fan favorites. Toby Keith is set to thrill the Buffalo Chip campers and concert attendees with an amazing stage show and string of number one hits as part of The Largest Music Festival in Motorcycling™. Keith joins ZZ Top as the first artists announced to the 2013 concert line up during the motorcycle rally at the 580 acre Sturgis Buffalo Chip® camping report and entertainment complex. More 2013 band announcements are coming soon from some of the biggest names in music. Early Specials for the best value on camping reservations and concert passes are available now for a limited time at www.buffalochip.com.

From his first No. 1 smash “Should’ve Been A Cowboy” to his latest Top Country Album chart-topper Clancy’s Tavern, Toby Keith has been one of the most consistent self-directed hit makers of his era. This latest collection’s lead single, “Made In America,” topped the charts as one of the fastest rising songs in a long line of chart burners from Keith’s pen. The second hit, “Red Solo Cup,” has become the most remarkable and commercially successful country single in recent memory with a viral video with more than 20 million views while topping the top downloaded country songs. “I Like Girls That Drink Beer,” thefirst single from Toby’s forthcoming album Hope On The Rocks in-stores November 13th, is now racing up the charts. Toby Keith is a multi-platinum superstar and is set to bring his down home American, sing along style of music to the Sturgis Buffalo Chip® for one electrifying night.

“With Toby Keith set to play, it is like one of our own is coming back home to the Chip,” says Rod Woodruff, owner of the Sturgis Buffalo Chip®. “Toby has performed at the Chip several times and each time he out does himself with an incredible show. The Chip crowd loves him and we love to bring him home to the Chip. You can bet Toby will once again bring down the house with his exciting show and legendary music.”

Sturgis Buffalo Chip® campers and concert goers can look forward to a night of down home party music as Toby Keith is expected to perform some of his iconic hits such as “I Should’ve Been a Cowboy,” “Red Solo Cup,” “Made In America,” “I Love This Bar,” “Courtesy of The Red, White & Blue,” “As Good as I Once Was,” and “Beer For My Horses” during the annual Buffalo Chip music festival August 2-11, 2013.

The Legendary Buffalo Chip has been offering its guests The True Sturgis Experience® for more than 30 years with its premium camping resort and world class entertainment. You can make reservations for the 73rd annual Sturgis Motorcycle Rally at The Best Party Anywhere™ at www.buffalochip.com or by calling (605) 347 9000.