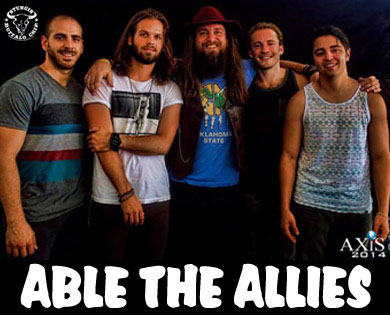 Hang Loose with these Southerners-Turned-Surfers during the Sturgis Rally

Catchy melodies and strong songwriting will draw you in when Able the Allies, take to the Buffalo Chip’s showcase stages during the August music festival. From Oklahoma to Oceanside, these alt rockers have traveled all over the U.S. to support their burgeoning musical career, and they will soon be able to remove “Sturgis Rally” from their bucket list.

Singer/guitarist Bobby Moore, who could easily get lost in a sea of Sturgis Rally bikers with his long-flowing hair and beard, leads the five-man band of eclectic musicians known to cover artists from Jim Croce to The Black Keys.

While the Allies never stray too far from their southern rock roots, the influence of the west coast has undeniably crept into the band’s increasingly popular catalog of original alternative rock songs.

After meeting and forming in Tulsa, Able the Allies decided to facilitate the recording process by moving to Oceanside, Calif., where they write tunes, surf and now are preparing themselves for the Best Party Anywhere™.

The Allies have been doing their homework and are ready to hit the big time with multiple trips to L.A. for sessions, a debut EP with platinum-producer, Jeff Blue (Universal, Atlantic, Sony BMG, Rock Shop Music), TV and radio appearances, and live performances in their hometown and surrounding cities!

Don’t miss this rare opportunity to see an up-and-coming band blast its way to the big time! Reserve your passes to see these heavy-hitting young rockers light up the Chip’s showcase stages, and be sure to check out the rest of the lineup of Sturgis concerts on the Chip’s daily schedule.

Have you witnessed the awesomeness of Able the Allies? Tell us about it below!

“I have been attending the Chip for many years, and I always enjoy the bands and all those who attend. Great job CHIP!” – David Brenneman