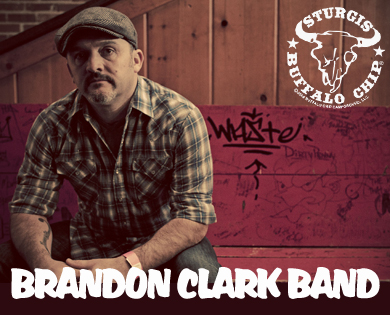 The Brandon Clark Band will renew your faith in the hard-working American spirit when it blends elements of country and rock with just a touch of folk storytelling for you during the Buffalo Chip’s August music festival. So when you saddle up for the 2014 Sturgis Rally, head to the Sturgis Buffalo Chip® showcase stages and listen to the tales the Tulsa-based band has to tell.

Classifying Brandon Clark Band has always been a challenge. With influences ranging from Merle Haggard and Johnny Cash to Black Crowes and Roger Clyne, this group best falls under the genre of “Americana.” This makes Brandon Clark and his fellow band members the perfect fit for the Sturgis Buffalo Chip®, where it’s all about kicking back with an ice cold beverage and cranking up the ‘Skynyrd!

Fiercely independent and tireless, the group has played a staggering 125 shows per year on average since forming in 2005. Meanwhile, band leader, Brandon Clark, averages an astounding 175 additional shows per year as a solo artist.

Brandon Clark Band has already won the “Best Red Dirt” category in the annual Absolute Best of Tulsa music awards three times, and Clark himself has twice won “Artist of the Year” honors, but this group is about win over the entire Sturgis Rally when they take to the Chip’s showcase stages.

Don’t miss your chance to see Brandon Clark Band and nearly 50 other world-class performers in the monumental lineup of Sturgis concerts at the Buffalo Chip for this year’s Sturgis Rally. Reserve your passes now!!

“Great entertainment. Fun venues. Adult spring break with expensive toys. You have to go at least once in your life.” – Frank Sullivant“