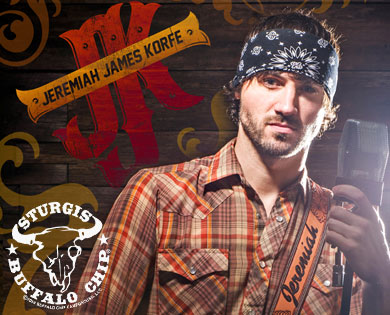 Soak up some old-fashioned country charm and out-of-this-world stage energy to kick start your night of Sturgis concerts at the Chip on Wednesday, Aug. 6. Emerging country artist, Jeremiah James Korfe, is taking to the legendary Wolfman Jack Stage to open for Florida Georgia Line and ZZ Top, and it’s sure to be a performance you’ll never forget!

Thanks in part to your votes, Korfe is the first-ever winner of the Buffalo Chip’s Big Sturgis Gig™ online talent search. Out of 165 bands that entered the search, Korfe had enough fan support to propel him to the final judging round for review from the Chip’s panel of celebrity musicians and music execs.  And after reviewing his submission, it was clear the judges were just as impressed with the sound Korfe described himself as “Foo Fighters meets Dierks Bentley.”

“Jeremiah really looks and sounds the part of country music’s next breakout artist. Country music as a genre seems to have started to incorporate a classic rock sound into its collective arrangement, and Jeremiah excels in that wonderful hybrid, seamlessly blending the traditional country instrumentation with a big rock sound that leans on driving guitar.”

Korfe has had to work hard to get to where he is now, dividing his time between touring, Nashville and his farm in Minnesota. While his Buffalo Chip performance will be Korfe’s first Sturgis Rally appearance, don’t be fooled; this ain’t his first rodeo.

This up-and-coming artist spent six years in L.A. writing for artists, which opened the opportunity to spend two years on the Auction Sports Tour, X Games and Dew Tour with his band “From Joyce.” His music has been placed on multiple TV shows such as MTV’s “The Hills,” and Discovery’s “LA Ink,” and Korfe himself has been featured in TV and print commercials for Harley-Davidson, Budweiser, and Crown Royal. He was also the season three winner of the hit CMT series, “Sweet Home Alabama,” an experience that led to the debut of his first country music video on CMT, where it charted in the top 10 for five weeks. 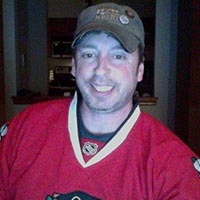 You’ve been watching, listening and voting for Jeremiah James Korfe for months during in the Big Sturgis Gig, so don’t miss your chance to see the culmination of all that hard work! Reserve your passes now for you chance to see him kick off an unforgettable night of Sturgis concerts at the Best Party Anywhere™!

Did you vote for Jeremiah James Korfe in the Big Sturgis Gig? Tell us why you thought he deserved to win in the comments below!

“He rides and he WILL rock Sturgis. Jeremiah James Korfe never disappoints an audience.” – Deb Rothstein