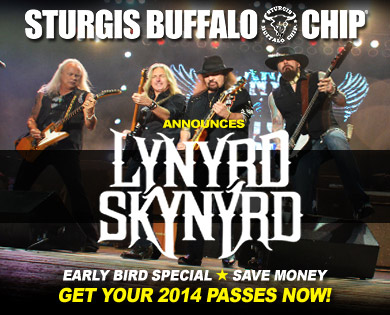 The South Rises Again for 2014 Motorcycle and Music Festival

Reserve Now!
Lynyrd Skynyrd set the bar high when they became the first band to sign on for a 2014 Sturgis Rally performance at the Legendary Buffalo Chip. The Southern rock gods will bring their unique mix of guitar-driven blues and traditional country undertones to the Largest Music Festival in Motorcycling™ the week of Aug. 3, 2014.

Originally formed in 1964 by three long-haired teenage rebels, Lynyrd Skynyrd is now considered one of the most respected bands in rock ‘n’ roll and is credited with the popularization of an entire musical genre—Southern rock. The Sturgis Rally favorites boasts a deep catalog of timeless hits including “Sweet Home Alabama,” “Saturday Night Special,” “You Got That Right,” “What’s Your Name,” “Smokestack Lightning,” “Simple Man,” “They Call Me the Breeze,” and “Gimme Three Steps.” But Lynryrd Skynyrd’s “Freebird,” with its blazing triple-guitar solo finale, takes the prize—often credited as the most requested song in rock history.

“Whether ‘Freebird’ releases the inner air guitar player in you, or you simply find yourself caught up in a little ‘Sweet Home Alabama’ nostalgia, it’s impossible to ignore the fact that Lynyrd Skynyrd produced some of the most loved and recognizable songs in rock ‘n’ roll history,” says Daymon Woodruff of the Sturgis Buffalo Chip®. “Pinnacled on generations of music lovers’ support, Skynyrd’s music is like your favorite bike, it just feels good to ride.”

While Lynyrd Skynyrd was inducted into the Rock and Roll Hall of Fame in 2006, the band’s music is equally rooted in country music. One listen to their candid down-to-earth lyrics should explain why they are universally loved among country music fans.

“Everybody’s so scared to say stuff these days, that’s not what I’m about,” says frontman, Johnny Van Zant. “We live in America, we can speak our minds. These are our values. That doesn’t mean we’re always right in everybody’s mind. Hopefully, we don’t offend a bunch of people. And if we do, well, get a record deal, man, and make your own songs.”

Don’t miss your chance to see the ultimate Southern rock band at the quintessential Sturgis campground in 2014. Reserve your passes now for the Best Party Anywhere™!