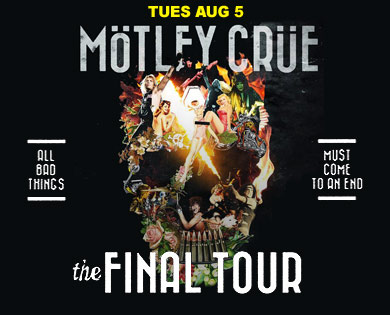 Legendary glam metal rockers, Mötley Crüe, will be storming the Wolfman Jack Stage for one last no-holds-barred Buffalo Chip performance as a part of their “All Bad Things Must Come to an End” tour. The group is calling it quits after 33 years of merciless metal and going out with a bang by taking one final tour of the U.S. with special guest, Alice Cooper. Both will join the August music festival lineup for a night of unapologetically rowdy rock that you’ll never forget!

“We believe artists should be in control of their own destiny and that destiny also includes when it should be done so that their fans can forever be proud,” Mötley Crüe bassist, Nicky Sixx, said in a recent interview with Rolling Stone.

Throughout the years, Mötley Crüe used their music to showcase their love of motorcycles, whiskey and women, and to portray their problems with substance abuse and general decadence. The group is currently working on their tenth and final album, which is tentatively set to be released sometime in 2014. All together, the band’s albums have sold more than 80 million copies worldwide, making them one of the world’s best-selling groups of all time.

Since their formation in 1981, Mötley Crüe’s onstage antics and outrageous looks have made them the must-see live band. But it’s their wild personas and offstage debauchery that served as the inspiration to their never-ending list of hit songs including “Kickstart My Heart,” “Home Sweet Home,” “Wild Side,” “Girls, Girls, Girls,” “Shout at the Devil,” “Dr. Feelgood” and “Smokin’ in the Boys Room.”

Don’t miss out on your last chance to see Mötley Crüe live at the Legendary Buffalo Chip during the 2014 Sturgis Rally. Reserve your place now to see the ultimate party animals get wild one last time at the Best Party Anywhere™!