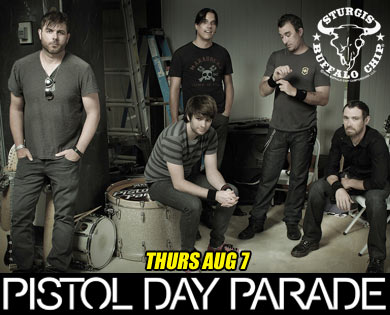 If you want to live like a rock star, then don’t miss Pistol Day Parade during the Largest Music Festival in Motorcycling™! Raw vocal power, ripping guitar solos and emotionally charged lyrics will fill the air as this Detroit-based modern rock band takes to the Wolfman Jack Main Stage Thursday, Aug. 7, prior to Pop Evil and Train, in addition to its performances on the CrossRoads Stage on Wednesday and Friday.

Pistol Day Parade will prove to you that today’s rock is still a force to be reckoned with. The band has already won over Nikki Sixx of Mötley Crüe, who chose the PDP song, “Not Today,” as one of his Sixx Picks on the Side Show Countdown. The band’s newest single, “Rockstar’s Girlfriend,” is also making waves nationwide, having debuted at No. 38 on Billboard’s Active Rock Charts.

PDP fans boast that the perfection you get on the studio albums is what you can expect when you see the band live. So don’t miss your chance to see this powerhouse band take the stage during the Sturgis Rally. Reserve your passes now for the Best Party Anywhere™!

“I have been attending the Chip for many years, and I always enjoy the bands and all those who attend. Great job CHIP!” – David Brenneman