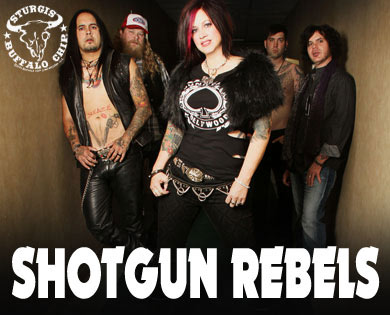 Step into the Crosshairs as these Sturgis Rally Newcomers Fire Off Rule-Breaking Rock During the August Music Festival!

Whether you are in the mood for a guitar solo reminiscent of legendary Chip performer, Slash, or some nasty, Angus-Young-style, three-chord, bluesy rock, you’ll want to ride over to the Sturgis Buffalo Chip® to see the band once described as “AC/DC and Guns N’ Roses get in a bar fight and everyone wins.” It’s the Shotgun Rebels, a five-piece featuring a little bit of blues, a little bit of rock and a lot of attitude!

The west Texas natives, fronted by powerful vocalist, Lanie Daniels, are raw, raunchy and in your face. Daniels, along with bandmates, Lil’ Dogg, Chevy Vegas, Chuck Corley and Rex Rogers, are ready to storm the Sturgis Buffalo Chip® showcase stages at the Largest Music Festival in Motorcycling™.

These southern musicians are no strangers to music festivals or jamming out with bikers, having been featured at Rocklahoma, SXSW and Republic Of Texas Biker Rally. Having played with past Chip® performers, Alice in Chains, Papa Roach, Kid Rock, Slash, and others, the Shotgun Rebels will deliver the kind of show that audiences are accustomed to seeing at the Best Party Anywhere™.

Don’t miss out on your chance to experience the colossal lineup of new bands taking to the Chip stages this year. Let Shotgun Rebels and the rest of the showcase lineup blow you away. So before you gas up that cycle and take off down the highway toward Sturgis, check out the collosal lineup of Sturgis concerts! Reserve your passes now!

“Got my tickets as soon as they were available! The Buffalo Chip is the only place to go for this guy!” – Nathan Voshell