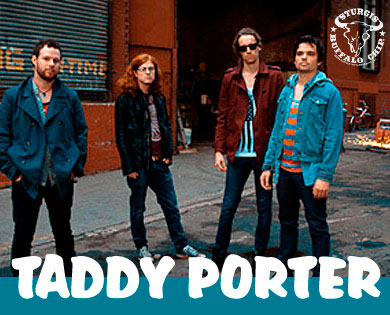 You may think you’ve heard it all at the Largest Music Festival in Motorcycling™, but you ain’t seen nothin’ until you’ve seen Taddy Porter unleash its tumultuous tunes on the Sturgis Buffalo Chip® showcase stages.

Taddy Porter add a decidedly upbeat twist to its southern rock-inspired sound by mixing elements of blues, Motown soul, raw rock and psychedelic pop. Add Taddy Porter to your list of “must see” Sturgis concerts as you head down the open highway for the 2014 Sturgis Rally! It’s sure to be a sonic experience you won’t soon forget.

The Stillwater, Okla. musicians have shared the stage with rock stars like legendary Sturgis Buffalo Chip® performer, Slash, and released a video starring Steven Tyler’s daughter. Rocking out with rock stars is nothing new for Taddy Porter, and they have a spectacular set list in store for the August music festival!

Taddy Porter are one of the most musically diverse groups featured in the Chip’s varied lineup of Sturgis concerts. Don’t miss you chance to drink in the soulful sounds of these Sturgis Rally newcomers. Check out the Chip’s daily event schedule and reserve your passes now to see it all at The Chip!

Have you watched Taddy Porter tear up the stage? Share your experience below!