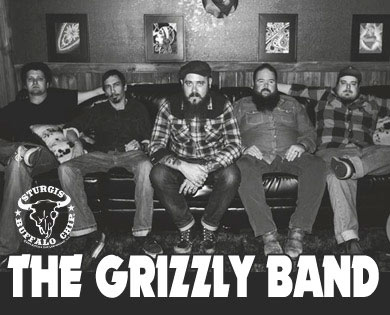 Feel the Vibe From These Sturgis Rally Newcomers!

If anything can rival the revving of 500,000 motorcycles rumbling into the Sturgis Rally, it’s the roar of The Grizzly Band!

The Grizzly Band draw upon an enormous list of influences, from Johnny Cash to punk rockers, Social Distortion, to produce a rare brand of punk rock/country Americana that adds yet another element to The Chip’s growing lineup of Sturgis concerts.

Grizzly and his cohorts have few peers when it comes to stage presence. The thickly-bearded front-man looks the part of his animal namesake. Grizzly’s guttural growl and creative chord progressions will satisfy Sturgis Rally fans who wander into The Grizzly Band’s musical lair at the Sturgis Buffalo Chip® showcase stages.

Don’t let Grizzly’s gruff appearance fool you; he is a gifted musician with many talents. Grizzly even produced an entire music video for the band’s hit, “Onward and Westward,” using only his iPhone and a single actor – himself.

So venture into the wilderness of the Sturgis Rally and find yourself a Grizzly. Check out the Chip’s daily event schedule and reserve your passes now for this year’s August music festival now!

Tell us what you think below!

“Another one of the most amazing shows in the world in the best place on the planet.”
– Real Joseph Edouard Morin