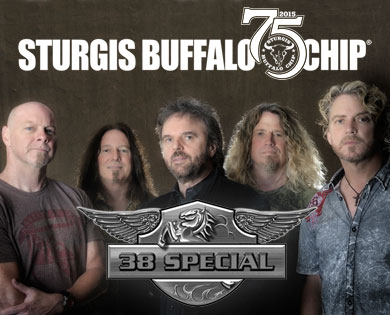 38 Special Go Rockin’ Into the Night of Sturgis Concerts on Sunday, Aug. 2

Get ready for a musical celebration of camaraderie and brotherhood that could only come from a band the likes of 38 Special. The Southern rock sensation will be taking to the Wolfman Jack Stage between performances from The Guess Who and Brantley Gilbert on Sunday, Aug. 2 for a night of Sturgis concerts you’ll never forget.

You’ll feel a flood of great memories come back as 38 Special plays classics you’ve been rocking to for decades like “Hold On Loosely,” “Caught Up In You,” “Rockin’ Into the Night,” “Back Where Your Belong” and “Fantasy Girl.” And you’re sure to make some new ones as they bust out some of their surprisingly fresh new material.

38 Special has long been a Buffalo Chip fan favorite, having helped to christen the newly built legendary Wolfman Jack Stage in 1999. That year, the Wild Eyed Southern Boys let loose their mixture of Bluesy roadhouse boogie to create a special live album from the Buffalo Chip stage, “38 Special – Live at Sturgis.”

If you were a part of the audience during that storied Chip performance in 1999, you can expect for 38 Special to bring even more intensity during their second Chip go-round in 2015. The band’s three decades of touring have caused them to mature into an even tighter unit, giving the players an innate ability to read each other on stage.

“We never wanted to be one of those bands that had maybe gotten a little soft or complacent over the years. We’re a team, and it’s always been kind of an unspoken rule that we don’t slack up, we stack up. We go out there every night to win,” says guitarist/vocalist Don Barnes.

You won’t want to miss your chance to see this Southern rock institution pull out all the stops during the star-studded night of Sturgis concerts with Brantley Gilbert, The Guess Who and Brian Grilli on Aug. 2. So don’t be boring and reserve you passes now!

Are you a 38 Special fan or were you lucky enough to be in the crowd when 38 Special rocked the Chip’s August music festival in 1999? Tell us about your experience in the comments below!

“Best party ANYWHERE!!!!!!!!! The only place to be over rally. Hottest women, coldest beer, and the most fun!!!” – Patience Whitman