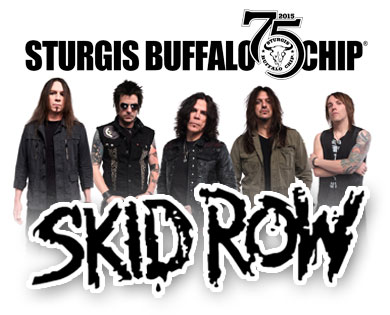 Can You Stand the Shock of Skid Row’s Hard Rock?

Prepare for a rock ‘n’ roll party from the wrong side of the tracks when Skid Row brings their no-holds-barred heavy metal to one of the hardest rocking nights of the Sturgis Rally. The New Jersey hard rockers will be joining Def Leppard and Sweet Cyanide to set the Wolfman Jack Stage ablaze during an unforgettable night of Sturgis concerts on Friday, Aug. 7.

Skid Row burst onto the hard rock scene in 1989, a time when seas of talented hard rock bands were tearing up the charts. Yet amidst waves of competition, the band carved a space of their own, settling near the top of a highly competitive pack with their massively successful eponymous debut.

Monster hits like “Youth Gone Wild,” “18 and Life,” and “I Remember You” helped the band’s debut quickly sell in excess of 5 million copies and lend to the band’s worldwide sales of over 20 million albums.

When Aug. 7 comes, will you be among the real partiers in the crowd for this legendary night of rock ‘n’ roll? Or will you be sitting on the Internet, pretending to be a bad ass while you wait for your mom to bring you a microwave burrito? Don’t miss one of the most epic nights in 75 years of Sturgis Rally history. Reserve your passes now!