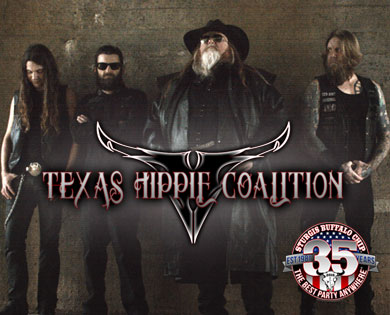 Get Ready for a Wild Biker Party Bigger than Texas

Get ready for a party the size of Texas during one of the wildest concerts you’ll ever see. Texas Hippie Coalition’s gritty Red Dirt Metal mayhem will stir your inner rebel during their 2016 August music festival performance prior to Cheap Trick at the Sturgis Buffalo Chip®. The Texas heavy metal quartet will turn up the Wolfman Jack Stage Tuesday, August 9, 2016.

Texas Hippie Coalition’s devoted cult following has grown like ragweed thanks to their explosive sound. Crafted from a lengthy list of legendary influences, lead vocalist Big Dad Ritch says THC is like “Lynyrd Skynyrd and ZZ Top had a child, and Pantera ended up raising it.” The band is currently touring in support of their latest release, “Dark Side of Black,” and will bring Buffalo Chip August music festival attendees to frenzy with head-banging party anthems like “Turn It Up” and “Hands Up,” and raise a sea of fingers to the air with songs of rebellion like “Pissed Off and Mad About It” and “Outlaw.”

Prepare to lose your mind when these Lone Star State outlaws bring their Red Dirt Metal to the Buffalo Chip. Because when Texas Hippie Coalition blasts that first note from the stage, the shockwave will start a non-stop party the likes of which have never been seen before.  Don’t get pissed off and mad about missing this show; reserve your passes today!

Are you Ready for a Party the Size of Texas? Tell us in the comments below!

“Wished I would have found you earlier, because I wasted a lot of years searching to have this great of a time. Anyone reading this, don’t hesitate, come see for yourself!!” – Tim Jenkins