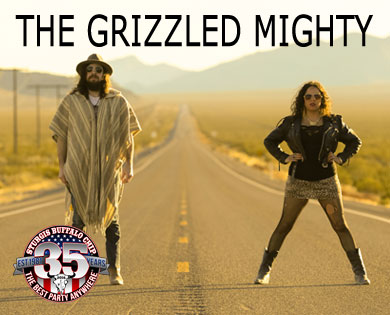 Blur the Lines of Reality during this Mighty, Mind-Bending Performance at the Largest Music Festival in Motorcycling™

Prepare for a performance that cranks up the distortion so far you’ll lose all sense of what’s real when The Grizzled Mighty roars into the Largest Music Festival in Motorcycling™ this August. This two-piece powerhouse from Seattle will fill the Legendary Sturgis Buffalo Chip® amphitheater with a psychedelic Southern-rock sound that delivers as much grit as it does groove prior to Cheap Trick and Texas Hippie Coalition on Tuesday, Aug. 9. And if you can’t wait till then, they’ll also be giving a preview performance on the Kinison Stage Monday, Aug. 8 after Lynyrd Skynyrd.

According to the members of The Grizzled Mighty, the band “…formed in the fiery belly of an active volcano.” That’s not far from the truth. Their mix of explosive guitar licks and thunderous drum patterns will flow through your ears like hot lava, melting your brain faster than ice cream on a hot August day.

You may have heard The Grizzled Mighty’s mind-expanding music in television ads for Nordstrom or the Showtime series “Shameless,” but that’s nothing compared to what you’ll experience when they turn it up for the 35th anniversary of The Best Party Anywhere®. The trippy blues-rock that oozes from a live performance of songs like “Miles of Cocaine” and “Need You Tonight” will make you feel like you’re having a full on out-of-body experience.

Don’t miss your chance to score a legal musical high that’ll keep you buzzing through the rest of the Sturgis Rally when The Grizzled Mighty scorches their mark on the Chip’s August music festival, Monday, Aug. 8 and Tuesday, Aug. 9. Reserve your passes now.

“The Chip was quite an experience!! The concerts were amazing; being able to walk right to them was fantastic.” – Melony Caddell Graham