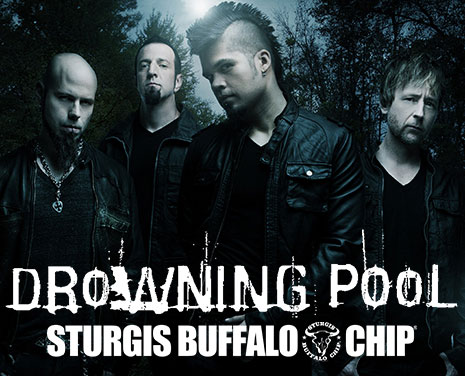 Rock Your Brains Out on Friday, Aug. 4.

All of your inhibitions will plunge deep beneath the surface where they’ll be begging for breath when Drowning Pool closes out the first night of the 2017 Best Party Anywhere on the legendary Wolfman Jack Stage with some insane, balls-to-the-wall heavy metal mayhem following a performance from Trapt,

The Dallas, TX alt-metal quartet left a crater on the heavy music industry with their 2001 platinum debut album “Sinner,” the impact of which is still rippling through the scene. They will be kicking off the Make America Rock Tour with fellow alt-metal giants of the early 2000s, Trapt, at the Best Party Anywhere and continuing to tour the states whilst supporting their latest release, “Hellelujah.”

Rock your brains into a pile of mush while the band blasts through their adrenaline-packed catalog of horn-raising hits such as “Bodies,” “Tear Away,” “Step Up,” “Let the Sin Begin,” “One Finger and a Fist,” “By the Blood,” and many more.

When Aug. 4 comes, will your body hit the floor of The Best Party Anywhere, causing an earthquake of metal madness? Or will you be at home knitting a pair of baby socks to keep your tiny tootsies toasty? Don’t miss this high-volume kickoff party to the Chip’s 2017 August music festival. Reserve your passes now!

“The people, camaraderie, awesome concerts, clean bathrooms and the list goes on and on! It was an awesome year and I can’t wait to see it all again next year!”