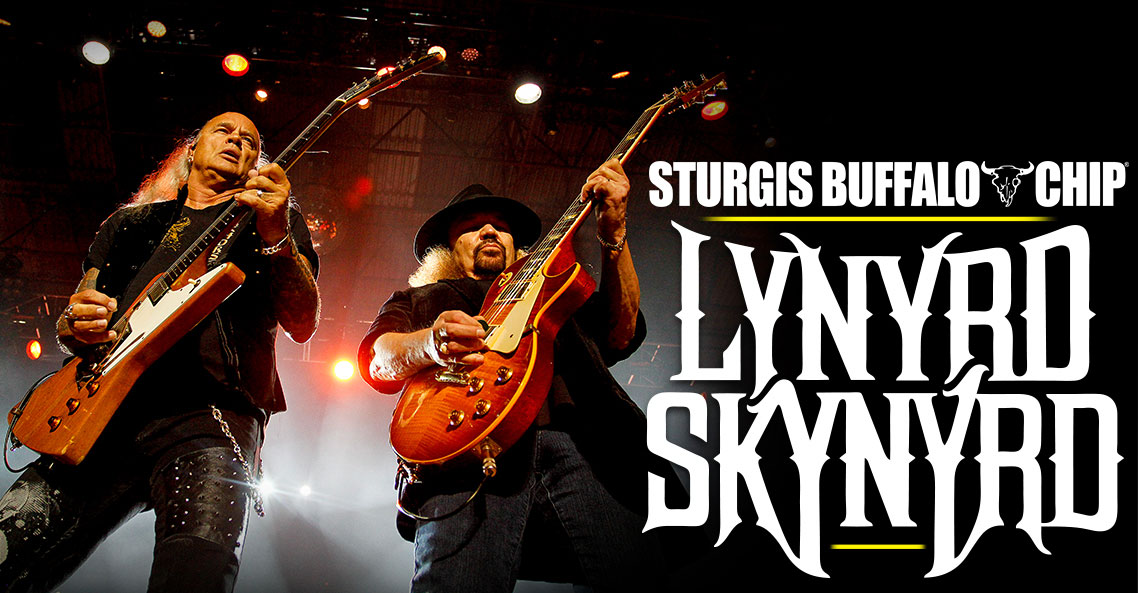 Bid Farewell to the Masters of Southern Rock at The Best Party Anywhere®  Aug. 6, 2018

Waving flags, revving engines and Freebird-shredding passion will bring you a feeling of pure freedom during a performance from America’s ultimate biker band. A long-running and favorite tradition is coming to an end when the self-proclaimed Sturgis Buffalo Chip® house band, Lynyrd Skynyrd, returns to rock the Wolfman Jack Stage afor the last time ever on their Farewell Tour.

When the godfathers of southern rock will rain down “Free Bird,” “Saturday Night Special,” “Simple Man,” “Tuesday’s Gone,” “That Smell,” “Gimme Back My Bullets,” “They Call Me the Breeze,” and “Gimme Three Steps,” on the Sturgis Buffalo Chip it could be your last chance ever to see the world’s best biker band  bid farewell. Don’t miss your last chance to see the greatest southern rockers for the last time.

Lynyrd Skynyrd’s 40-plus-year legacy and 30 million albums sold have earned them fans from all ages and walks of life. No place is that more evident than their concerts at the Chip’s August music festival.

Take one look around the audience, and you’ll find folks aged 18 to 80 waving lighters and singing along to “Sweet Home Alabama” in blissful unison. It’s scenes like this that prove Skynyrd has withstood the test of time to become a driving force in the lifeblood of American music, and August 6th will be your last chance to be a part of that.

Lynyrd Skynyrd is one of rock ‘n’ roll’s most respected bands, with spots on both Rolling Stone Magazine’s and VH1’s lists of 100 Greatest Artists of All Time.

The Rock and Roll Hall of Famers are also credited with popularizing and shaping the entire genre of southern rock. It’s easy to see why generations of music lovers like you have become die-hard Skynyrd fans who just can’t ever get enough.

There’s no other band more fit to rock the Best Party Anywhere® than the mighty Lynyrd Skynyrd, and no audience will be better able to greet them than you. After all, this band has likely been the soundtrack of your life as far back as you can remember.

Don’t miss your opportunity to bid farewell to one of the Buffalo Chip’s and America’s most beloved traditions. Reserve your passes now

“Best time ever! Can’t wait to go back, the wife and me fell in love all over again!” – Michael Cammarata