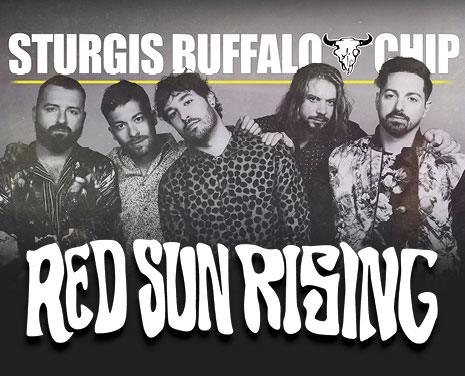 The stirring sounds of Red Sun Rising will have you swearing you’ve just seen the light when their classic grunge-influenced alternative rock floods the Buffalo Chip Amphitheater with illuminating melodies and riffs. Rock and roll’s rapidly ascending sons will beam from the Chip’s Wolfman Jack Stage on Saturday, Aug. 4, charging you up for the Foreigner concert to follow it.

Red Sun Rising burst onto the national scene with their 2015 debut, “Polyester Zeal.” The album yielded two No. 1 singles on Billboard’s Mainstream Rock chart, “Otherside” and “Emotionless,” making the band the first in over a decade to chart two No. 1s from their debut album. The band is currently touring in support of their March 2018 release, “THREAD,” which features their latest top ten hit, “Deathwish.”

Don’t miss your chance to have the time of your life partying all night long with Red Sun Rising and Foreigner on August 4. Reserve your passes now!