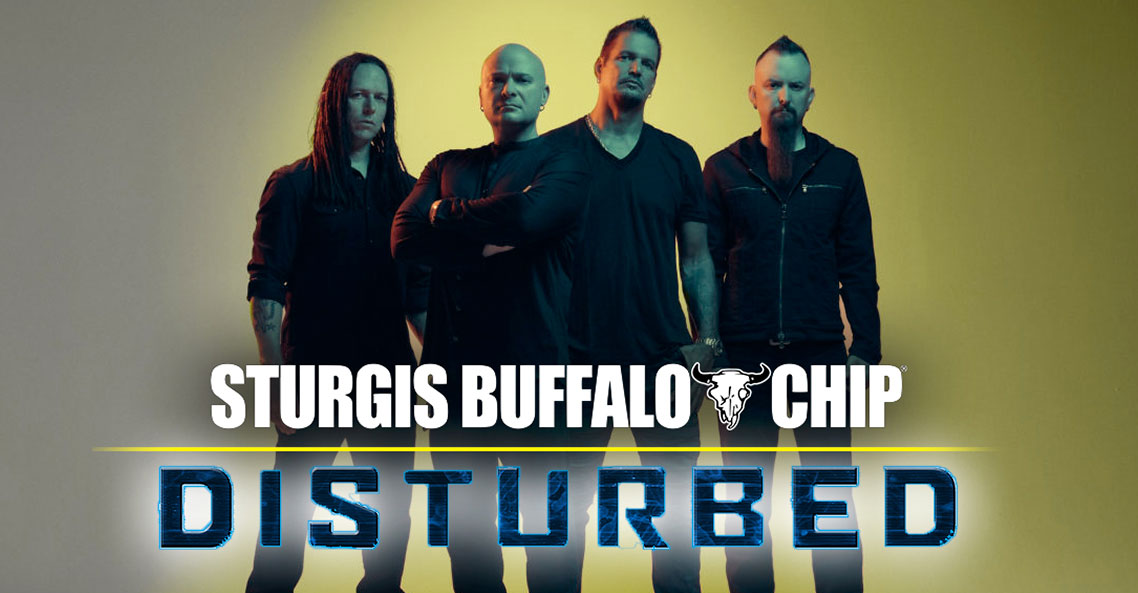 Get Down with the Sickness!

Reserve Now!
Sound the sirens and alert the guards. Things are about to get a little crazy– Windy City modern metal titans Disturbed blast their brand of hooky, heavy, haunting and hard-hitting rock from the Sturgis Buffalo Chip®’s Wolfman Jack Stage on Tuesday, Aug. 6. When they do, you’ll have no choice but to give in and get down with the sickness.
Disturbed has been a mainstay of the hard rock world since the release of their now 5x platinum debut album, The Sickness, in 2000. The band has five platinum or multiplatinum albums to their name, five Billboard 200 no. 1 albums, eight no. 1 singles and 21 top 10 hits. Their latest album, Evolution, was released in October 2018 and has already yielded a number one single and a top 10 single, as well as landing at no. 1 on the Billboard US Top Rock Albums chart.
Grab your squad of deranged friends and thrash your minds into mush to epic hard rock bangers like “Down With the Sickness,” “Stricken,” “Indestructible,” “The Vengeful One,” “Inside the Fire,” “Land of Confusion,” “Stupify,” and many, many others. And don’t forget your lighters because you’ll need them for powerful, moving ballads like “The Sound of Silence” and “A Reason to Fight.”

You’d have to be off your rocker to miss what’s going to be one of the craziest concerts to happen during the 2019 Sturgis Rally. Don’t let that happen– reserve your passes today!