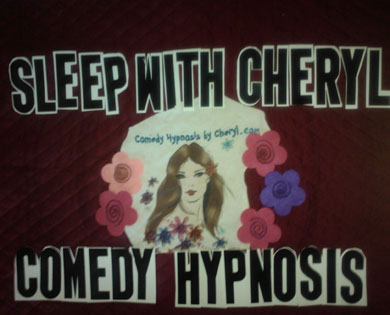 Cheryl the Hypnotist mystifies audiences at the Buffalo Chip

Cheryl’s Comedy Hypnosis show is more than a comedy show and is a perfect fit for our rally goers at the Legendary Buffalo Chip. Cheryl will take her audience members on a journey into the power of imagination when they become the stars in her show at the new CrossRoads at the Buffalo Chip (Hyperlink to CrossRoads Landing).

Closest friends and complete strangers suddenly think they are an exotic dancer or that they’ve witnessed a UFO landing in this side splitting comedy show.

Cheryl has been performing for audiences since 2003 and has hypnotized more than 10,000 people. She has performed at Chicago’s Navy Pier, at the U.S. Navy Base-Great Lakes, Ho-Chunk, BlackJack and Harrah’s Casinos.

Enjoy this hilarious and entertaining comedy show at the Legendary Buffalo Chip during the 2012 motorcycle rally.