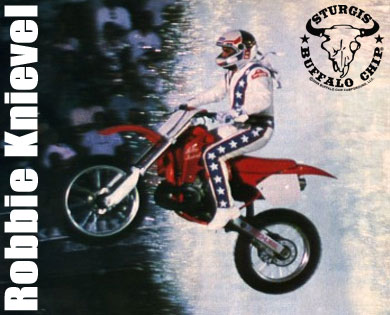 In 2007, Knievel thrilled the Sturgis motorcycle rally crowd with a jump over two WWII tanks after a performance by Grand Funk Railroad and Foreigner.

Knievel made headlines in 2000 when he made a ramp to ground jump over the huge Buffalo Chip stage, avoiding concert lighting hung from the stage’s roof. The thrilling Sturgis rally jump excited Chip crowds when crashed into haystacks in the amphitheater, cracking several ribs, but managing to party through the rest of the evening. The jump was featured on the Travel Channel’s Sturgis: The Great Ride, one of the network’s most requested shows, which is still in rotation.

Knievel stepped it up even more during the 2003 Sturgis motorcycle rally when he commemorated Harley-Davidson’s 100th Anniversary by successfully jumping over 100 Harley-Davidsons inside the amphitheater at the Chip. That jump also featured Knievel’s wild trike with a jet engine.

The annual Legend’s Ride is an opportunity for celebrities and riders to gather and travel from the historic town of Deadwood to the Legendary Buffalo Chip and take part in the Largest Music Festival in Motorcycling. Money from the ride and the live auction go towards the Black Hills Special Olympics and the Sturgis Motorcycle Museum and Hall of Fame. Get your tickets for this legendary ride now!