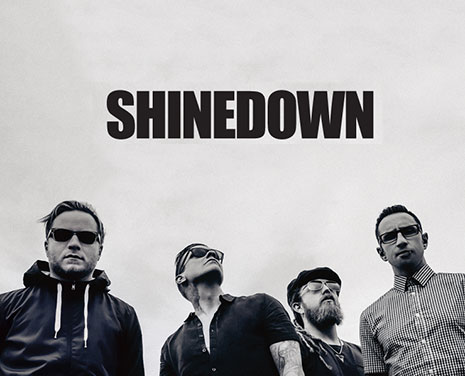 Lose Your Mind to Shinedown and the American Flat Track Races Sunday, Aug. 6

Put on your riot gear and prepare for a rumble when Shinedown’s hard rock bombshell of fiery vocals and razor-sharp riffs detonate into one of the Sturgis Buffalo Chip®’s most explosive concerts. The Jacksonville, Florida quartet will cut the cord on The Best Party Anywhere® during the Buffalo Chip’s August music festival Sunday, Aug. 6, 2017 following American Flat Track’s Buffalo Chip TT Races Presented By Indian Motorcycle as part of the annual Moto Stampede event series.

You’ll be stunned by intense performances from the band’s ever-growing catalog of hits, which includes “Second Chance,” “Cut the Cord,” “Enemies,” “Sound of Madness,” “The Crow & the Butterfly,” “State of My Head,” and many more. It’s the power of these tunes that have propelled Shinedown’s total album sales to over 10 million copies worldwide, a number that keeps growing due in part to the volume of killer singles dropping like hot wax from their latest release, “Threat to Survival.” The band has been touring feverishly in support of the album since its release in September 2015. It’s this tireless work ethic that makes Shinedown a band poised to make heads roll on any given night, especially when they take the Wolfman Jack Stage.

The Largest Music Festival in Motorcycling® just turned the volume to eleven because Shinedown’s alternative metal packs the power of an entire pile of amps into a single passage. Can you handle the Sound of Madness? Reserve your passes today!

“Love it. No other place like it.”
– Jason Rivier