PUBLISHED ON WEDNESDAY, MAY 13, 2015
By Mike Kilmer
100
SHARES
facebooktwitterpinterest
linkedinprint

The Buffalo Chip’s groundbreaking Student Build Challenge is returning for its fifth year, and the question on everyone’s mind is, “How can the program possibly improve upon what it did last year?”

With the bar set high, the Buffalo Chip kicked off the 2014 Student Build Challenge on Tuesday, Nov. 26 with a press conference to answer this very question. The event introduced the public to this year’s group of enterprising student participants, as well as the teachers, administrators, mentors and sponsors who make the motorcycle project possible. Sturgis Brown High School principal, Jeff Simmons, kicked off the conference by announcing that this will be the first year the students will customize a brand new motorcycle—a 2014 Harley-Davidson® Street Glide.

Student Build Challenge mentor, Keith Terry, explained during the conference, this will pose a new set of obstacles for the students. “Harley-Davidson has changed a lot of the features, and that is going to make it a real challenge. The frame is different.  A lot of the body parts are different. But the good news is that the [sponsors] that are helping us out are already on top of it,” Terry said.

Most of the custom parts installed on the bike are not yet available to consumers, which means the build will bring them to market for the very first time. Because the students have the unique opportunity to install the custom parts before other builders, this year’s Student Build Challenge bike may be the first custom 2014 Street Glide in existence.

Black Hills Harley-Davidson’s managing partner, Terry Rymer, addressed the students about this rare opportunity during the press conference. “I’m excited because it’s an all new platform. I know there’s probably a lot of builders out there and custom parts manufacturers who are trying to get their hands on one these, and you guys are going to be breaking ground,” Rymer said.

The innovation behind this year’s bike build project doesn’t end with the student’s ability to debut the first custom 2014 Street Glide. Plans are also in place to give the bike a graffiti-themed custom paint job. 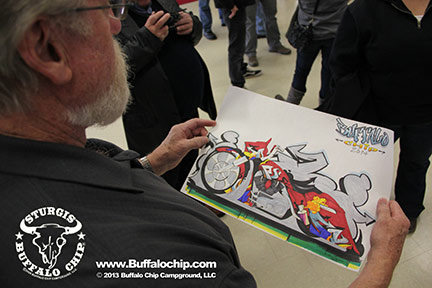 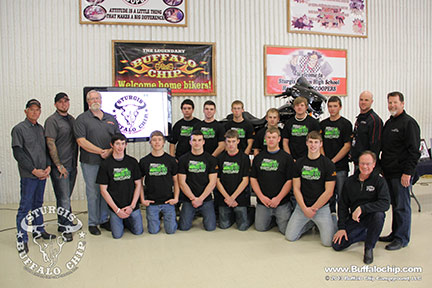 In 2013, the student participants proved they had learned the skills to put them on par with some of the world’s best builders. They took their custom Road Glide to the renowned Donnie Smith Bike Show, where it won first place in the Full Custom Bagger Open Class and Overall Best Display. The students also took first place in the Full Custom Bagger category and won Best Custom Paint Job at the Black Hills Motorcycle Show. The bike was later auctioned off in support of the Buffalo Chip’s annual Legends Ride® charity event, where it brought in a whopping $55,000.

You can follow along with the progress of the 2014 Student Build Challenge on the Sturgis Legends Ride Facebook Page. Only Legends Ride participants will have a chance to bid on this amazing bike, so reserve your tickets today and you could be the lucky bidder who rides it home!

The 2013 Student Build Challenge bike is featured during the month of July in the new 2014 Bagger Fever calendar, and a limited number of calendars are available at www.baggerfever.net. Act now and you can proudly display the world’s finest custom baggers on your wall for 16 months! 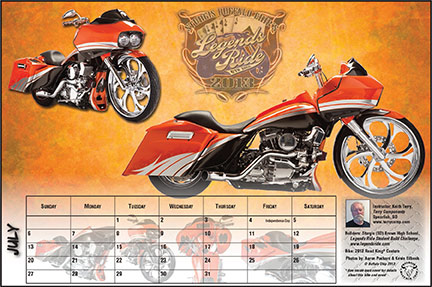