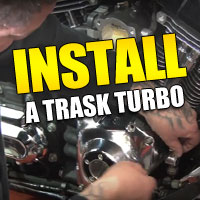 The world of custom motorcycling is truly infinite, and the number of ways you could modify your sled’s appearance and performance is limitless. Unfortunately, not all of us have the time, skills or resources to morph our motorcycle into a high-performance work of art. However, there are plenty of modifications that don’t require a million dollars and a degree in motorcycle technology to make. A bolt-on turbo system is one of those upgrades.

A turbo system is a quick way to add horsepower to your bike without adding a noticeable amount of weight. A turbo system adds power by compressing the air that flows into the engine. This allows more air to enter the engine, causing more fuel to be burned and, as a result, more power is made. A Stage 1 Trask Touring Turbo System can add up to 50 horses and up to 50 lbs of torque to your American V-Twin.

In addition to their performance benefits, turbo systems are also fairly simple to install. Here’s how you do it (if you want to skip straight to the video just scroll to the bottom)

That’s it! check out this video installment of Buffalo Chip Garage featuring Nick Trask of Trask Performance demonstrating to Buffalo Chip Challenge™ participants how to install a Stage 1 Trask Touring Turbo System. It’s something you can do to your own American V-Twin over the course of a few hours.

If you’re looking to upgrade your motorcycle’s performance, be sure to check out Trask Performance. In addition to a variety of custom turbo systems, they carry body and engine parts and exhaust and airflow systems designed to make your bike reach its performance potential.

If you want a chance to bid on the 2014 Harley-Davidson Road King featured in this tutorial video, make sure to reserve your pass for the 2015 Legends Ride®. A second wave of passes just became available; so don’t miss your opportunity to join the Ride that Rocks™.

Do you perform your own upgrades and installations to your motorcycle? Tell us what you’ve done in the comments below!