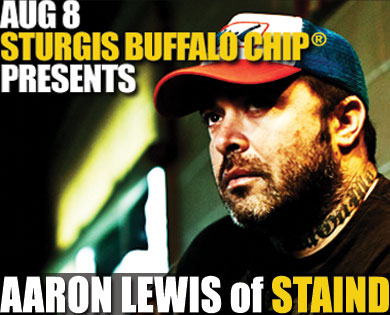 Aaron Lewis from Staind at the Sturgis Buffalo Chip

The Legendary Buffalo Chip is excited to have breakout country artist Aaron Lewis join the growing list of artists playing at the Largest Music Festival in Motorcycling. Aaron Lewis will play on Wednesday, Aug. 8 on the famous natural amphitheater stage.

Aaron Lewis grew up in Massachusetts and enjoyed riding motorcycles, fishing, hunting and rock ‘n roll. He was the founding member, lead vocalist and rhythm guitarist for Staind, leading them to sell 13 million albums worldwide.

Recently, Aaron Lewis has come back to his roots and to the first style of music he heard, country music. He has been carrying on the tradition of storytelling and songwriting as a solo artist. In 2011, he released his debut solo album, Town Line, followed quickly by his recent album, “The Road,” released in June of 2012. “The Road” tells the story of life on the tour bus.