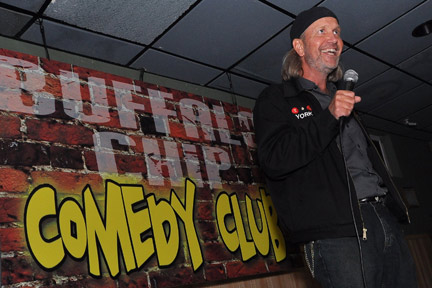 As if the Best Party Anywhere wasn’t fun enough, during the 2012 Sturgis rally, Dwight York’s comedy will shock you with one-liner jokes that that will keep you laughing all night. Dwight’s adult humor is…. smart, funny and to the point, but not exactly the point you might be expecting. Expect only to laugh if you see one of his 2012 Sturgis shows with jokes like “I had to take a Drug Test the other day, it came back negative, which means my Dealer’s got some explaining to do.”

Dwight York is acting manager of the best little comedy club anywhere at the Sturgis rally and is a laugh a second when he performs on the Sturgis Buffalo Chip’s Comedy Club stage. He also films funny highlight videos from participants around the Sturgis campground and runs a nightly joke contest where any campground participant brave enough to get up on the comedy stage can grace the Sturgis rally audience with a laugh or two.

Dwight first took the stage as a comedian in February of 1989 and from that very first performance established himself as one of Minneapolis’s hottest comics, eventually becoming a regular of the nationally syndicated Bob and Tom Show. Dwight can also be heard on Satellite Radio’s Sirius Dog Comedy Channel.

In December of 1999 he published his first comedy book, “The Vile File — Jokes too Sick for the Stage,” but not too sick for the Legendary Sturgis Buffalo Chip stage or the Sturgis rally crowd.  He may have a few jokes about the Sturgis motorcycle rally and the Sturgis Campground experience up his sleeve… if that is where he keeps em. Check him out at www.DwightYork.com.

Welcome Back To Sturgis, SD Dwight.