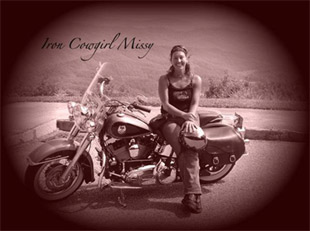 Iron Cowgirl had survived cancer. And In 2009, a 15,000 mile, 10 week, motorcycle ride led Iron Cowgirl Missy to the Sturgis Buffalo Chip ®in Sturgis, S.D. “Life is a journey,” she says, “and I believe there is an Iron Cowgirl in every one of us women.”  She had become one. Iron cowgirl will be returning to the 2012 Sturgis rally once again as a Buffalo Chip Showcase Artist, joining an already amazing line up of Sturgis rally concerts at the Buffalo Chip.

After having survived her bout with cancer, Iron Cowgirl rode her iron horse with a sleeping bag and a guitar strapped to the side of her bike, down the coast of Michigan, down to Florida, and then headed west where she finally ended up at the Legendary Buffalo Chip during the Sturgis motorcycle rally. At the Buffalo Chip she made friends and memories that define the music she’s made, songs like: “Heart of Steel”, “What You Deserve” and “Chasing My Dreams” which she will be serenading to fans nightly during the annual motorcycle rally and Sturgis music festival.

Now a Sturgis rally music veteran Iron Cowgirl has played the Buffalo Chip, taverns, benefits, fund raisers, rodeos, campgrounds, festivals, and other venues as a solo artist and even made a cameo tambourine appearance with the Doobie Brothers during one of their concerts in Sturgis at the Buffalo Chip. Now a full band touring from Jackson, MI., Iron Cowgirl plays raw, emotional music based on real life experiences. Iron Cowgirl is “Making Music to Life.” They play originals with a sweet southern rock style that are ideal for biker events and the Sturgis rally. Iron Cowgirl Missy is, no doubt about it, a biker. She plays and rides from the heart, a “Heart of Steel.”

Iron cowgirl will be performing at the special reception during the Sturgis rally for the Biker Belles live auction at the Sturgis Buffalo Chip from 5:00pm to 8:00pm Wednesday, Aug 8th, 2012 to highlight the Biker Belles® event. This exclusive reception will feature a fashion show, live music by Iron Cowgirl, additional entertainment, complimentary food and drink along with a special live auction and silent auction.

Welcome back to Sturgis, South Dakota and the Best Party Anywhere, Missy.