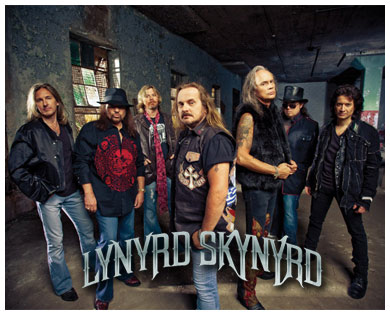 From humble beginnings in the summer of 1964, three kids from Robert E. Lee High School in Jacksonville, Florida, Lynyrd Skynyrd has become one of the most respected bands in rock, helping to create and sustain the southern rock genre. The band will play at the Legendary Buffalo Chip during the official Sturgis Motorcycle Rally week, Aug 9th, 2012.

Every v-twin-riding American biker has had “Sweet Home Alabama” or “Free Bird”  blaring through their heads (or in the case of bagger riders through their stereos) while riding down the highway, especially those in the beautiful Black Hills during the Sturgis Rally. In helping to invent the Southern Rock genre, Lynyrd Skynyrd also helped invent a related genre – biker music.

“Gimme Three Steps,” was their first hit in 1973, and Sturgis Rally bikers have been treated to a string of rock anthems that followed, including “Sweet Home Alabama,” “Gimme Back My Bullets,” “They Call Me The Breeze,” “I Know A Little,” “Saturday Night Special,” “What’s Your Name,” “You Got That Right,” “Swamp Music,” “Smokestack Lightning,” “Truck Drivin’ Man,” and “Free Bird.”

Lynyrd Skynyrd was inducted into the Rock ‘n’ Roll Hall of Fame in 2006. Rolling Stone and VH1 both them to their 100 Greatest Artists of All Time. And, Guitar World magazine named the guitar solo from Free Bird as the third greatest of all time.

The band’s three-guitar drive has been the basis of their unique, bluesy sound with awesome guitar licks that identify every tune as a Skynyrd song. Their music is enjoyed by rock and country fans alike. Country Music Television’s (CMT) biography says Skynyrd “may have jammed endlessly on stage, but their music remained firmly entrenched in blues, rock, and country. For many, Lynyrd Skynyrd’s redneck image tended to obscure the songwriting skills of its leader, Ronnie VanZant. Throughout the band’s early records, VanZant demonstrated a knack for lyrical detail and a down-to-earth honesty that had more in common with country than rock ‘n’ roll.”

Country fan or rock fan, we know motorcycle fans love Skynyrd. You can reserve by phone by calling 605-347-9000 between 8 a.m. and 5 p.m. MDT Monday through Friday.