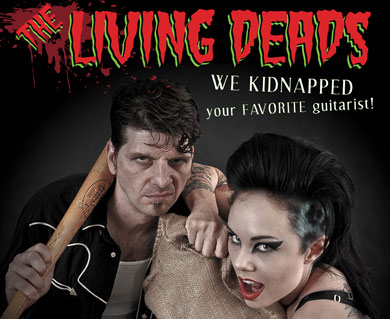 The Living Deads’ one-of-a-kind and do-it-yourself attitude while running their band is just what the Legendary Buffalo Chip likes to see in the people who come to the Best Party Anywhere™! At the Buffalo Chip, we like to do things a little differently than the traditional route, and so does The Living Deads, who will be performing at this year’s largest music festival during the Sturgis motorcycle rally.

The Living Deads pride themselves on their do-it-yourself thinking, throwing tradition out the window, or throwing a burlap sack on it. The Living Deads consist of Randee McKnight on drums/vocals and Symphony Tidwell on upright bass/vocals. Since their guitar player quit the band at 3 a.m. as they were leaving town for their tour, they have taken to “kidnapping” various guitar players to play with them. They have kidnapped Danny B. Harvey of The Head Cat, Chuck Hughes of The Hillbilly Hellcats, James Hunnicutt of the Revolvers, Hank Hays and many more.

The band does everything from living full time in their RV, designing and printing their own t-shirts to booking their own tours.

There is no telling who they will kidnap next, but the Legendary Buffalo Chip is looking forward to determining who it is next. The band will play the Largest Music Festival in Motorcycling™ on nightly Aug. 3-11. Get your tickets online now for this once in a lifetime concert. 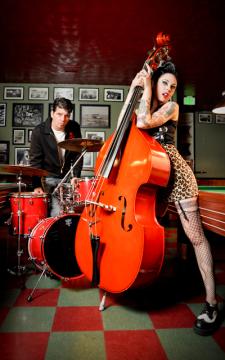