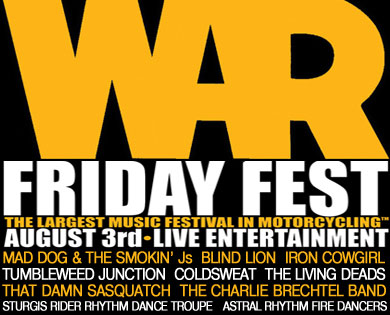 The Best Party Anywhere™ is kicking off the party early this year with Friday Fest, a once in a lifetime special opportunity to see the band WAR and nine Buffalo Chip showcase bands performing on the main stage in one night.

War, from California, is an American funk band that was formed in 1969 and is an American funk band, bringing a mix of rock, funk, jazz, Latin, rhythm and blues and reggae to whatever stage they rock. War will bring their hits “Low Rider,” “The Cisco Kid,” and “Why Can’t We Be Friends” to the legendary Buffalo Chip stage on Aug. 3.

War’s lyrics are often seen as socio-political, although their music is loved nation wide for their laid-back, California funk vibe. War features a harmonica and saxophone in their melody lines, for a unique blend of sounds. The music has been sampled and recorded by singers such as Janet Jackson, Korn and TLC.

Nine other bands will come together to rock the main stage the Friday night to kick off the Buffalo Chip’s nine day music festival that coincides with the Sturgis motorcycle rally.

Mad Dog & the Smoking J’s, Blind Lion, Tumbleweed Junction, The Living Deads, That Damn Sasquatch, Iron Cowgirl Missy, ColdSweat, The Charlie Brechtel Band will start the party off on Friday, Aug. 3 at 2 p.m., with War as the headliner. Visitors to the legendary Sturgis campground should come early and take a dip in the Bikini Beach at noon. Kegs will be rolled out into the amphitheater at 2 p.m. for Kill the Kegs, which means free beer for those who get there early until the kegs run dry. Once the kegs run dry $1 drafts and $1 Dogs will be offered until 5 o’clock. Music starts at 2 p.m.

Don’t miss your chance to participate in this legendary event. Get your tickets to the Legendary Buffalo Chip now and start this rally off early with Friday Fest at the Buffalo Chip.

In addition, the Legendary Buffalo Chip and the Sturgis Motorcycle Museum and Hall of Fame and BIC Productions, Precision Cycles and Charlie Brechtel are giving away a signed Chopper, built by Danny Ray, during this year’s Sturgis motorcycle rally. The bike, signed by artists who performed during the Largest Music Festival in Motorcycling in 2011 at the Legendary Buffalo Chip, will be awarded to someone at a party at the Buffalo Chip this year. Bands that signed it include Toby Keith, Alice Cooper, Def Leopard, Styx, Buckcherry, Bachman and Turner, Edgar Winter and more.