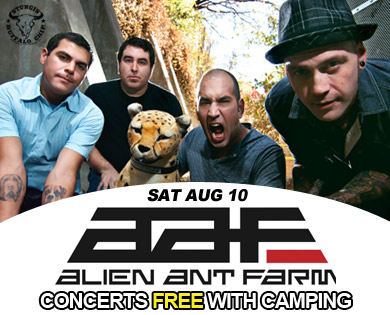 Rock’s “Smooth Criminals,” Alien Ant Farm, will join bands Fuel and Filter on Aug. 10 for the final night of music during at the Legendary Buffalo Chip Campground.

During their early days, the group’s tongue-in-cheek approach to hard rock led them to cover a variety of unexpected songs.  But when Alien Ant Farm released “Smooth Criminal,” originally a Michael Jackson hit, they struck a chord with audiences worldwide.  The track rose to the #1 position in Australia, New Zealand and on the U.S. Modern Rock charts.  Their newfound notoriety even brought them a Grammy nomination in 2001 for Best Rock Performance, which should say a thing or two about their explosive live performance fans can expect to experience at the Sturgis Buffalo Chip.

In 2006, Alien Ant Farm went their separate ways for several years.  But in 2010, the quartet began touring and making new music, with the original lineup of Dryden Mitchell on vocals, Terry Corso on guitar, Tye Zamora on bass and Mike Cosgrove on drums.

“The first batch of these new songs are pretty to the point and pissed,” says Mitchell.  “Angry, but not negative.  That is possible in this non-tangible, musical and lyrical world.  Unfortunately not possible in the real world, and that’s why I love music.  I can get it all out without hurting anyone”.

Alien Ant Farm’s Sturgis concert is sure to bring playful energy with a bit of a temper to the Sturgis music festival.  Reserve your place now for yet another awesome concert at the Chip.