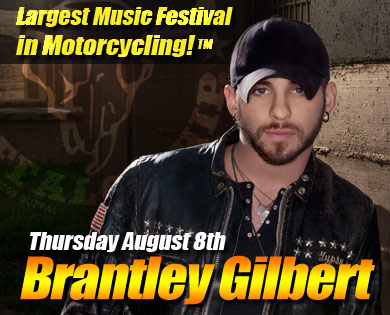 With his small town upbringing, his country twang makes his music very relatable to those who have grown up knowing how to “Kick it in the Sticks.” From parties in the dirty South to the love of family, country star Brantley Gilbert sings about himself and things happening in his life, and leaves his listeners walking away feeling like family after hearing his music. The latest in great Sturgis concerts announcements, Brantley Gilbert will bring his hometown lyrics to the Buffalo Chip’s Sturgis music festival at the Wolfman Jack stage during the 2013 Sturgis motorcycle rally on Thursday August 8, 2013.

After growing up in Jefferson, Georgia, just outside of Athens city limits, Gilbert credits his unique sound to his upbringing and small town influences. While growing up, he always seemed to be attracted to southern country rock music, which has heavily influenced his music, and which he has mixed in his own music with his personal heartaches, trials, triumphs, and successes.

Gilbert was instantly a hit in his hometown, attracting the same familiar faces to each show, and he soon realized it was time to start growing and playing bigger venues, with a new renovated sound. It wasn’t long before his acoustic shows turned into country rock shows, putting on large rock infused shows that will fit in perfectly at the Buffalo Chip’s Sturgis Music Festival.

Much of Gilbert’s musical career has centered around his contributions to artists such as Jason Aldean, writing popular hits such as “Dirt Road Anthem,” “My Kinda Party” and “The Best of Me,” making him not only a well known country artist, but a great songwriter across the board.

Gilbert now tours the country, putting on shows not only with a country sound, but dripping with rock soul infusion, bringing a rocking show that is sure to blow the socks off even the toughest of bikers at the Sturgis concerts at the Buffalo Chip. Gilbert’s hits “Kick it in the Sticks” and “Country Must be Country Wide” are sure to get the crowd rocking and those motorcycles revving all night long at the unbelievable one of a kind Legendary Buffalo Chip Sturgis Music Festival. Make your reservations now to see this dynamic rocking country star take the stage at the Sturgis concerts, which will also include ZZ Top and Toby Keith, with many more events taking place throughout the week!