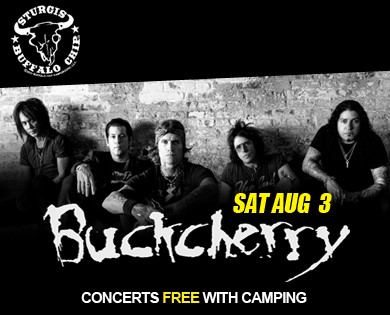 Never Before Performed Live in its Entirety, the Hard Hitting Platinum Selling Album Expected to Rile Up 2013 Sturgis Concert Fans

Sturgis rally concert fans at The Chip™ are in for an unusually raucous treat as Buckcherry blasts their most popular platinum selling album “15” beginning to end during the Best Party Anywhere™, something the Sturgis rally and the rest of the world has never before seen.

“Known for outrageous high energy shows, Buckcherry’s ‘15’ will be a live Blitzkrieg of hits cutting through fan’s excitement with annihilating musical force,” says Daymon Woodruff of the Sturgis Buffalo Chip.

Saturday, August 3, 2013, only at the Sturgis Buffalo Chip® during the Sturgis motorcycle rally, band members Josh Todd (vocals), Keith Nelson (guitar), Stevie D. (guitar, Jimmy Ashhurst (bass), and Xavier Muriel (drums) blend together all the punk grit, gutter attitude, honest storytelling, and razor sharp hooks that made them famous. The hard rocking show will include popular songs such as “Crazy Bitch,” “Sorry,” and “Next 2 You,” to name a few.

The perfect blend of punk and rock that carried Buckcherry to stardom makes them the perfect fit for the hottest and only Sturgis concert festival of its kind.

Buckcherry’s third album, 15, to be performed as their 2013 Sturgis concert, was released in 2006, became an international platinum-selling phenomenon and radio mainstay. The album reached #9 on the Billboard Hot 100 and #8 on the Billboard Pop 100. Their stateside sales-to-date surpass 2.8 million.

Get your passes for a Sturgis concert experience that cannot be duplicated or imitated anywhere else in the world.