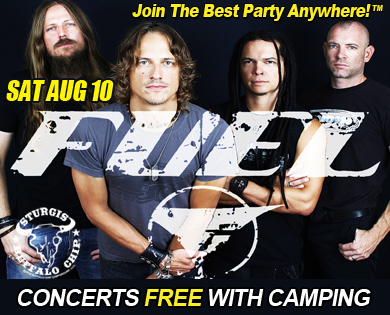 Fuel joins the monumental line up of 2013 Sturgis concerts at the Legendary Buffalo Chip on Saturday, August 10.

The release of songs like “Shimmer,” “Innocent,” and “Hemorrhage (In My Hands),” brought Fuel to the forefront of modern rock music and has kept them in heavy rotation on rock radio stations since.

Over the years Fuel has experienced several changes to its line up, but in 2012 the group welcomed back original front man, Brett Scallions.  “There’s been a lot of turmoil within the band over the past few years and a lot of that is reflected in these songs,” says guitarist and chief songwriter Carl Bell.  “When change happens it brings out the best and the worst in people, and I’d like to think that for us it was mostly the best.”

Fuel has performed sold out tours internationally—firing up audiences around the world.  So don’t miss this chance to see them ignite the stage at during the final night of Sturgis concerts at the Buffalo Chip!