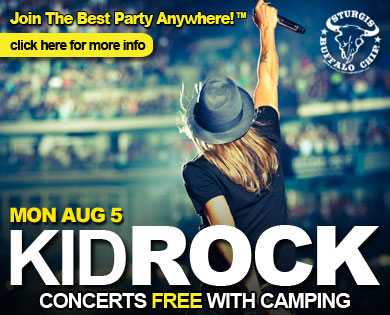 Kid Rock and his electrifying kick-you-out-of-this-world performance will make his way to the Best Party Anywhere on Monday, Aug 5 for the 2013 August music festival. The hard rocker that has brought fans everywhere hits like “All Summer Long,” “Cowboy” and “American Badass” will put on a show during the 2013 Sturgis motorcycle rally that you won’t want to miss.

The 2013 Sturgis concert audience at the Chip can count on one amazing show at this year’s August music festival with a slew of recent hits under Kid Rock’s belt! Known for his showmanship, high-energy stage shows, and controversial moments, Kid Rock recently shocked many people with the lack of rap, metal, and parental warning stickers on his 8th album release, “Born Free.” But don’t be fooled, no one serves up the badass swagger that Kid Rock can. He delivers. The “Born Free” album, having a collaborated list of diverse artists such as Heartbreaker Benmont Tench, Red Hot Chili Pepper Chad Smith, David Hidalgo from Los Lobos, Chavez guitarist Matt Sweeney, as well as Bob Seger, Sheryl Crow, Zac Brown, Trace Adkins, T.I. and Martina McBride, wasted no time becoming a hit.

Previously Kid Rock has produced hit albums such as “Rock and Roll Jesus”, released in 2007 and which debuted at #1 on the charts for 100 weeks. It was the biggest selling rock album of 2008. Kid Rock’s hit “All Summer Long” gave him a springboard to expand his touring base outside of America and will blow the audience up with recognizable riffs the 2013 Sturgis crowd will never forget. Kid Rock, the hard rock, hip hop and country crossover artist has hosted the CMT Awards twice and has performed at events ranging from the Grammy’s to the VMA’s, EMA’s and CMA’s to the Hip Hop Honors.  Kid Rock shares the Sturgis Buffalo Chip’s military support and patriotic attitude, has played for troops overseas numerous times, and to this day, remains one of the most vocal supporters of our soldiers abroad in the entertainment industry. A perfect fit for the Chip’s 2013 August music festival crowd.

The Kid Rock Foundation, in addition, has worked to help those in need, raising over $400,000 on his “Care” tour alone, for those less fortunate within the tour market.

See this legendary show live, which is sure to convert you into a Kid Rock fan regardless of your musical taste! Get your tickets to the August music festival now!