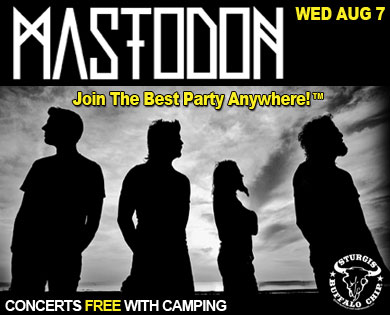 Mastodon, a band Rolling Stone magazine stated as being the best metal band of their generation and recently booked to perform this August music festival, is known for complex concept albums that tell elaborate stories, rather than striving for as many singles as possible. This technique landed them critical acclaim from well respected icons in the industry, including Metallica, The Melvins, The Flaming Lips, and CeeLo Green. Mastodon has used this as momentum to continue pushing musical boundaries to release their universe bending, high energy masterpiece, The Hunter. The Hunter and all their previous albums, Remission, Leviathan, Blood Mountain, and Crack the Skye will shape their performance at the 2013 August music festival.

The Hunter, an album that garnered Mastodon their second Grammy nomination, followed the idea of following one’s free will, rather than sticking to a particular storyline. Mastodon’s melodic, pummeling, frenetic, and muscled sound is one to rock your throttles to life as you roar along with Mastodon during the August music festival at the Chip™. The Hunter is dedicated to guitarist/vocalist Brent Hinds’ brother, who was an avid hunter that died of a heart attack while hunting. Mastodon plowed through the struggles and came out on top with their most ambitious album to date.

Mastodon’s songs range from aggressive songs about cosmic sex to meth addicts finding knots in trees to video game asteroids mixed with hemorrhoids and sorrowful ballads about pursuing happiness with diligence. Mastodon lays it all out on the table and inspires everyone of every walk of life in their specific season.

The untraditional, aggressive but thoughtful, articulate and guttural sounds that shot Mastodon to the top of the Billboard hard rock charts will kick off the Wednesday night of hard rock Sturgis rally concerts at the Chip. Make your way to the Legendary Buffalo Chip for the 2013 August music festival as they join ZZ Top, Toby Keith, Brantley Gilbert, Halestorm, Kid Rock, Queensryche and many more. It’ll be a legendary party that you will not want to miss! Get your passes now for this legendary concert.