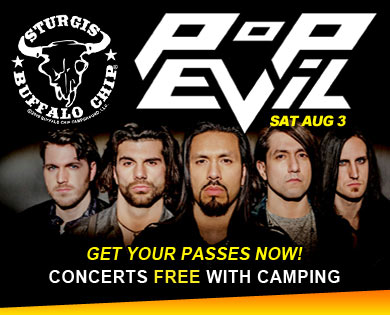 Affectionately referred to by fans as “The greatest band to happen to America in the last 20 years,” and hot off the tails of their recent third album release “Onyx”, Pop Evil, is making their way to the Best Party Anywhere™ Saturday Aug 3, 2013. Pop Evil will join Buckcherry and The Cult for a triumphant night of pure rock. You won’t want to miss Saturday’s hard rock three punch crescendo as Pop Evil kicks off.

“The stereo just doesn’t get loud enough for Pop Evil,” says Daymon Woodruff of the Sturgis Buffalo Chip. “That’s why you have to see them live at the Chip. Anyone coming out to let loose and have a good time, is going to get it.”

Buffalo Chip Campground Pop Evil fans can expect to experience the ball busting ride of American rock that has been rocking crowds world wide over the past couple of years with slamming tunes such as “Monster You Made,” “Trenches,” “Boss’s Daughter,” and “100 in a 55,” in addition to the songs off their new album.

Pop Evil’s third album, Onyx, blends together the grandiose melody of the 70s, the danger of the 80s, the emotion of the 90s, and the loudest of modern riffs, bringing the album to the top. The band boasts three Top 5 songs at Rock Radio, a fourth in the Top 10, a half million digital singles sold and over 1,000 shows a few short years into their musical career. Famous tracks off of Onyx that fans can be sure to hear include “Trenches,” “Divide,” and “Torn to Pieces,” along with other albums’ hits including “Last Man Standing,” “Monster You Made,” and “Boss’s Daughter” from their 2010 album War of Angels.

Pop Evil hails from the great state of Michigan. Their songs have been heard on ESPN, ABC, FOX and other networks. Sports teams have blasted their music over loudspeakers, bringing fans together and filling sports teams alike with confident power, which is what they will do at the hottest August music festival.

Current band members Leigh Kakaty (vocals), Nick Fuelling (lead guitar), Dave Grahs (rhythm guitar), Matt DiRito (bass), and Chachi Riot (drums) are the perfect example of the American Dream, having been raised in the heartland and using muscle and sweat to bring their musical vision from their heads to the hearts and minds of hard rock lovers worldwide.

Pop Evil will bring their in-your-face riffs, moving melodies, and relatable lyrics to the Legendary Buffalo Chip August 3rd and join a growing list of rocking, ear splitting bands at the Largest Music Festival in Motorcycling. Get your passes now for this night of rock with Buckcherry, The Cult, and Pop Evil during the Sturgis motorcycle rally.