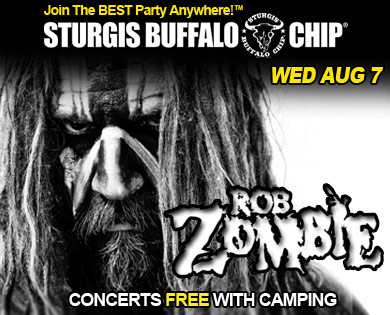 For some, the Zombie fascination may have started in the mid 80’s with White Zombie’s tough and addictively sinful beats in songs like “Thunder Kiss ‘65’.” Others may have come on board later as eerily stunning dance beat remixes like “Never Gonna Stop” emerged. Now on the explosive cusp of garnering new fans yet again with the release of his latest movie, “The Lords of Salem” and his fifth solo album, “Venomous Rat Regeneration Vendor,” 7 time Grammy award nominee, Rob Zombie, is expected to hit the Sturgis bike fest at The Chip™ like the resultant force of World War II bomb bay doors opening.

“Rob Zombie is three generations of Amazing,” says Daymon Woodruff of the Sturgis Buffalo Chip. “There has never been anything like him. As original as he is memorable, with nearly 30 years of hits, and his best album to date, fans will remember this Rob Zombie show at the Chip for years to come!”

Rob Zombie has sold more than 15 million albums worldwide to date, including Hellbilly Deluxe, which was the album that defined Rob Zombie as a solo artist after the breakup of multi-platinum group White Zombie. Rob Zombie also had major breakthrough film success with his re-imagining of John Carpenter’s Halloween in 2007 and Halloween 2 in 2009, not to mention House of 1000 Corpses, The Devil’s Rejects, and The Haunted World of El Superbeasto.

Party goers at the 2013 Sturgis bike fest can expect to hear singles such as “Dead City Radio and the New Gods of Super Town,” “Ging Gang Gong De Do Gong De Laga Raga,” “Lucifer Rising,” “Behold! The Pretty Filthy Creatures,” and a long list of fan favorites such as “Dragula” and “Thunder Kiss ‘65’,” from his previous albums as well.

Get your passes now to the Best Party Anywhere and join Rob Zombie, Mastodon and Machine Head for this one of a kind Sturgis motorcycle rally concert night you won’t want to miss!