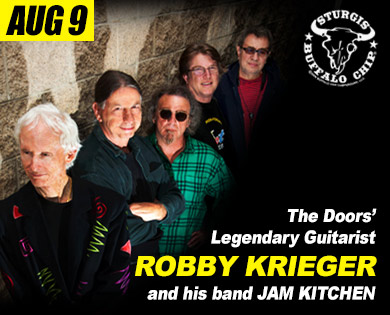 The famed Doors’ guitarist, Robby Krieger, who wrote many of The Doors greatest hits and his band, Jam Kitchen, will join Sublime with Rome for an unforgettable evening of performances at the Sturgis Buffalo Chip® Friday, Aug. 9.

As a young man, Krieger was influenced by a variety of musical genres including classical, jazz, blues, rock and folk. But it was his fingerstyle approach to the electric guitar—taken from flamenco music—that was key in developing the Doors’ distinctive sound. Krieger pushed far beyond the musical boundaries his ‘60s rock counterparts to help establish the Doors as one of the most influential bands of the era.

“I didn’t plan on rock ‘n’ roll,” says Krieger. “I wanted to learn jazz. I got to know some people doing rock ‘n’ roll with jazz, and I thought, I could make money playing music!”

To say that Krieger enjoyed a successful music career is an understatement. After joining forces with Doors’ front man, Jim Morrison, the legendary guitar player went on to write some of the band’s best known songs, including “Light My Fire,” “Love Me Two Times,” “Touch Me,” and “Love Her Madly.” In 2011 Krieger was voted number 76 on Rolling Stone’s list of the 100 greatest guitarists, and to this date the Doors have sold more than 100 million albums worldwide.

Excited about Robby’s upcoming performance at the Sturgis Buffalo Chip, President Rod Woodruff says, “I only had to hear ‘C’mon baby, LIGHT MY FIRE’ once to know this songwriter would forever be a big part of Rock ‘n Roll history. And, yes, I’m still singing ‘LOVE ME TWO TIMES’ and ‘LOVE HER MADLY’, too.  Robbie Krieger’s music helped put the Doors on top of the world.  He’s earned his legendary status and we are indeed privileged to have him perform for us at the Chip and let us sing along to the Doors’ songs generations of rockers will always know.”

Don’t miss your chance hear the Chip echo with the haunting music of the Doors, played by the one and only Robby Krieger. This is the Sturgis concert that rally-goers will be talking about for years, so reserve your passes now for this history-making performance!