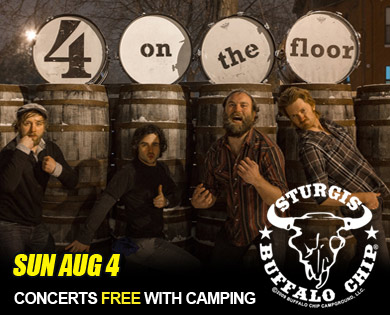 After their unbelievable foot stomping performance at the 2012 August music festival, up-and-coming Minneapolis rockers, The 4onthefloor, return for their second appearance at the Legendary Buffalo Chip on Sunday, Aug. 4.

“Four on the floor,” a term which originated during the disco era, describes a rhythmic pattern wherein the bass drum is hit on every downbeat. However, The 4onthefloor has adapted this concept to fit their fusion of delta blues and classic rock sounds.

The four-piece band has become known for each member playing a bass drum and only writing songs in 4/4 time. Since their formation in 2009, The 4onthefloor has released a handful of albums using this formula. It’s no gimmick. According to guitarist James Gould, these rules are “limiting in a way that really forces you to be more creative.” And without a doubt, this creativity will shine through during the band’s powerful Sturgis Rally performance.

The 4onthefloor joins ZZ Top and Halestorm for night three of this year’s August music festival.  Reserve your passes for this Authentic Sturgis Experience™ today.