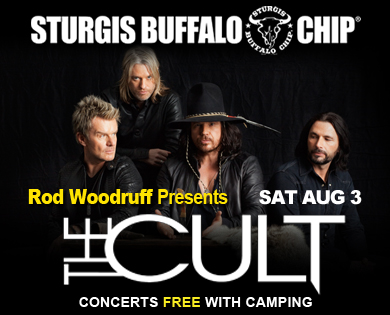 For the first time ever, The Cult brings their trailblazing hard rock hits from the 80’s and 90’s as well as their energetic hard rock from their latest 2012 release to the Sturgis concert lineup Saturday Aug 3 2013 for one high energy show.

Born out of the ashes of the UK post-punk scene, The Cult evolved to become one of the most influential and controversial rock bands of the late 20th century, selling millions of albums, headlining arenas and stadiums around the world, infusing innovative possibilities into the worlds of music and art, and quickly ascending through the ranks of the indie music world to achieve global status. As early as its first American tour in 1984, The Cult became one of the handful of important bands in the U.S. post-modern and hard rock communities. The band was embraced by the lost children of The Doors and Velvet Underground, and a generation that was waking up to the influence of 60s and 70s rock icons like Led Zeppelin, The New York Dolls and David Bowie.

As one journalist noted, “Using a few simple riffs and images, The Cult creates an entire environment, one more exciting and stimulating than our own.”

And that may just be what separates The Cult from other artists. Imagery is all-important to vocalist/lyricist Ian Astbury, imagery in the music and in the art that accompanies the Cult’s projects. Astbury is attracted to words and the image that each word creates. He is engaged by the power of nature, folklore, the concept of destiny, animal power symbols, the survival of the species, spirituality, and certainly the Native American myth and culture, a subject of many of The Cult’s songs.

The constant core of The Cult is Astbury and guitarist/composer Billy Duffy. Attitude incarnate, the chemistry between these two vastly different artists – equal-parts genuine affection and palpable tension – remains the source of their long-standing partnership. Duffy grounds Astbury’s esoteric side with a hard rock perspective, and there is no doubt that at all times, these two have each other’s backs.

Following a string of EPs and singles in the U.K., The Cult signed to Beggars Banquet Records and released its debut album, Dreamtime, in 1984. They were immediately booked by famed indie champion Ruth Polsky to perform at the legendary Danceteria in New York City. “We arrived in New York in July 1984,” remembers Astbury. “As soon as we landed, I knew I was home.”

In 1985, the band recorded the Love album with producer Steve Brown, experienced its first high-profile success with the classic track “She Sells Sanctuary” that won a CMJ Award for Song of the Year, presented to the band by Yoko Ono. The Cult was then quickly signed by Seymour Stein to Sire Records, home of Madonna, Talking Heads and The Ramones. To support Love, The Cult embarked on its first major world tour that took them throughout the U.K. and Europe, to the U.S. and Canada, first-time concerts in Tokyo and Osaka, and a booking on “Saturday Night Live.” “Touring was a major part of our lives,” said Astbury. “We never seemed to be home during the 80s, and that took its toll upon our psyche.”

Following the breakthrough success of Love, The Cult solicited producer Rick Rubin in 1986, originally to assist in finishing its album Electric; but eventually, the band rerecording the entire album with Rubin as producer at New York City’s Electric Ladyland Studios. “We couldn’t believe it at first,” remembered Duffy, “but we finally realized that he was right. He was tough on us in the studio, making me come up with whole new riffs for song, but it was worth it. We got the album we wanted. It’s got the power of the bands that first made us want to be in rock ‘n’ roll.”

The Electric album was released in 1987, and while it went on to be featured in the book “1001 Albums You Must Hear Before You Die,” it polarized critics and audience members. Regardless, Electric peaked on the U.S. and U.K. charts at #38 and #4 respectively, became the band’s first Platinum album, and was supported by a world tour with Guns N’ Roses in the opening slot for the North American leg. Beginning in January of that year, The Cult headlined arenas in the U.K., Europe, the U.S., Canada, and Australia, opened select dates for Iggy Pop and David Bowie, returning at the end of the year to sell out Wembley Arena and Brixton Academy in London. The pace was intense.

After nearly seven years of non-stop touring and recording, The Cult moved to Los Angeles in 1988 and began work on Sonic Temple, setting up shop in Vancouver with Bob Rock. This was to be a watershed moment. The band was at the top of its game, and Sonic Temple became The Cult’s second album to achieve Platinum success when it was released in 1989. Sonic Temple featured some of The Cult’s most popular songs including “Fire Woman,” “Sun King,” “Edie (Ciao Baby),” and “Sweet Soul Sister,” and the band achieved critical and commercial success as the album attained the #10 spot on Billboard’s Top 200 Albums chart. Additionally, the band’s promo videos were a fixture on MTV’s main rotation, and The Cult was the first band to appear on the legendary “120 Minutes” and “Headbangers Ball,” simultaneously. The Sonic Temple tour was an unprecedented success, but took its toll mentally and physically on the band members.

Astbury has often been a step or two ahead of the masses. With the 1967 Monterey Pop Festival in mind, his 1990 “Gathering of the Tribes,” a two-city, two-day festival that brought together a diverse roster of rock, rap, and pop acts and their respective audiences, was the blueprint for Lollapalooza and subsequent traveling festivals such as Warped, Mayhem, and Ozzfest. “I thought it would be great to put a diverse bill together and see if it could happen and introduce all the segregate groups to each other,” Astbury explained. The final bill featured Iggy Pop, the Charlatans U.K., the Cramps, Ice-T, Indigo Girls, Queen Latifah, and Soundgarden – along with an appearance by the American Indian Dance Theatre and representation from various environmental and social-activist groups. With “Gathering of the Tribes,” Astbury demonstrated that “us and them doesn’t exist anymore.”

Nineteen-ninety-two saw the release of Ceremony that rose to #25 on the Billboard charts and was well-received by the band’s core audience. The Cult went on to perform to its biggest crowds yet, with Lenny Kravitz signed on as an opening act. The tour wound up in a glorious celebratory night at the Los Angeles Forum.

The band needed a creative challenge.

Again, Rick Rubin entered the picture, producing The Witch as part of an eclectic
soundtrack for the movie “Cool World.” The band then forged ahead and began working with producer Bob Rock on its fifth studio album simply titled The Cult. The album, stripped down and raw in its lyrical content, reached #1 on the UK charts.

Performing at Australia’s “Big Day Out” in early 1995 alongside Primal Scream, Ministry and Hole, the cracks were evident with Astbury’s performances becoming more and more erratic. After a particularly adrenaline-fueled show, Astbury left the tour and the band on Rio de Janeiro’s Copa Cabana Beach. “I sat in a hotel room in Miami and got my head together,” confessed Astbury. “I decided I wanted to explore another direction.”

Astbury recorded two albums in the space of three years, Holy Barbarians and Spirit Light Speed, that was produced by Chris Goss, while Duffy, along with the Alarm’s Mike Peters, formed the group Colorsound. “I never felt The Cult was over,” said Astbury, “just on ice. I needed time to discover who I was.” Having been in bands and on stage since the age of 19, in 1998, Astbury took some time off and traveled to Tibet and Nepal, a journey that had a profound affect on him.

In 1999, The Cult returned with a heralded, sold-out seven-night stand at the House of Blues on Hollywood’s Sunset Strip, renamed the “House of Cult” for the run. A new record contract with Lava/Atlantic Records quickly followed. However, no one could have predicted what was about to take place in America, much less the music industry, when 9/11 happened. Although the band’s sixth studio album, Beyond Good and Evil, proved to be prophetic with songs such as “War” and “Ashes and Ghosts,” the Time Warner/AOL merger essentially left the band without a functioning label. Recalls Astbury, “When we arrived in New York City about a month after 9/11 for a gig at Madison Square Garden with Aerosmith, the mood was subdued, it was heartbreaking.”

Danny Sugarman contacted Astbury in 2001 about participating in the reunion of The Doors for an episode of VH1’s “Storytellers.” After the taping, Sugarman asked Astbury to play again with The Doors’ keyboard player Ray Manzarek and guitarist Robbie Krieger; the performance went so well, Astbury was asked to take part in the “Doors of the 21st Century”/”Riders on the Storm” projects, performing 150 shows over a five year period.During this time, Duffy kept himself occupied with a variety of projects. He recorded a debut album and toured with his new band Circus Diablo, and formed Cardboard Vampyres with Jerry Cantrell, playing select dates on the west coast. Astbury collaborated with the British band U.N.K.L.E. in 2007 for their album War Stories. That same year, The Cult launched the “Return To Wild Tour,” signed a new deal and in 2007, released Born Into This, produced by lauded British producer Youth, and acclaimed by fans and critics. The UK’s Mojo called it “a wholehearted, utopian and irrefutably exciting record.”

The band continued touring in support of the album followed by the 2009-2010 “Love Live” tour, where they performed the seminal Love album for the first time in its entirety on dates in the U.S., Europe, New Zealand, Australia and Japan, peaking at a sold-out performance at the Royal Albert Hall in London, a dream of Duffy’s.

In 2011, The Cult – Astbury, Duffy, drummer John Tempesta and bassist Chris Wyse – recorded Choice of Weapon, the band’s first new studio album in five years, set for a May 22, 2012 release date on Cooking Vinyl Records. Long-time Cult collaborator and producer Bob Rock put the finishing touches on the foundations that were laid by producer Chris Goss. The album’s 10 tracks, reveal the band at its rawest and most visceral, encapsulating cinematic visions and themes of love, revolt and redemption.

According to Astbury, “We don’t have fans, we have devotees. You either need it or you don’t. You either get it or you won’t. There is nothing casual about The Cult.”