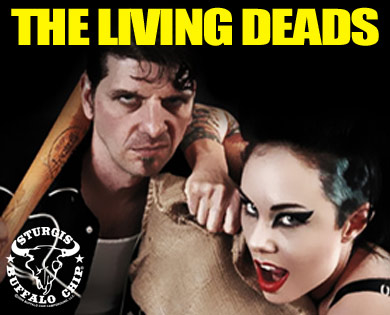 Join the Best Party Anywhere early during the Sturgis Rally, and stay late!

When the Living Deads hit the stage at the Buffalo Chip, it’s impossible not to have a good time. The band’s sexy Rockabilly sway led by sultry upright slap bass player, Symphony Tidwell and dramatic drummer Randy McKnight, grabs attention and keeps it. The duo, with their most recently kidnapped guitarist, makes their way to the Largest Music Festival in Motorcycling, kicking off the 2013 party right July 30 at the Sturgis Buffalo Chip Campground’s Bikini Beach. Come early and stay late.

There’s no better way to kick off the 2013 Sturgis rally than with a few pre rally party nights at the Buffalo Chip’s Bikini Beach with the Living Deads. The Living Deads are a knock out band from Denver, CO that are impossible not to like.

“Greasy, Energetic, and Sensual, The Living Deads are exactly what Rockabilly was meant to be,” says Daymon Woodruff of the Sturgis Buffalo Chip. “Their live performance is like an orgasmic Rockabilly crescendo, every single time. Fans love ‘em and we’re glad to have them at the Chip.”

When the Living Dead’s original guitarist unexpectedly quit the band at 3 a.m. one year, Tidwell and Mcknight took to kidnapping local guitarists to fill the spot. Since then the duo has kidnapped various guitar players throughout their tours. They have kidnapped Danny B. Harvey of The Head Cat, Chuck Hughes of The Hillbilly Hellcats, James Hunnicutt of the Revolvers, Hank Hays and many more. Who will accompany them to the Sturgis rally in 2013?

Get your passes now and check out The Living Deads at the Chip during the 2013 Sturgis Rally! You’ll be glad you did.